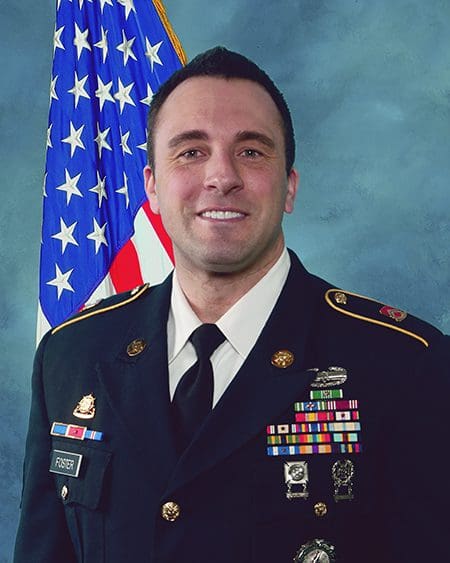 A recruiter in the northeast region of Wisconsin is the latest recipient of the Thomas E. Wortham IV Achievement Award.

“It is still sort of surreal,” said Staff Sgt. Jason Foster, an Oshkosh, Wisconsin resident raised in Neenah. “Just to be mentioned in the same breath as Thomas Wortham IV and all that he did was an absolute honor in itself.”

The Wisconsin National Guard award recognizes a Soldier or Airman’s dedication not only to their military duties, but to community service as well. It is named for the late 1st Lt. Thomas Wortham IV, who served in both Troop A, 105th Cavalry and the Chicago Police Department. The Chicago native was also the president of the Cole Park Advisory Council in Chatham, and worked to make the neighborhood safe for children to play in area parks. He was murdered May 19, 2010 outside his parents’ Chicago home when four men attempted to steal his motorcycle. 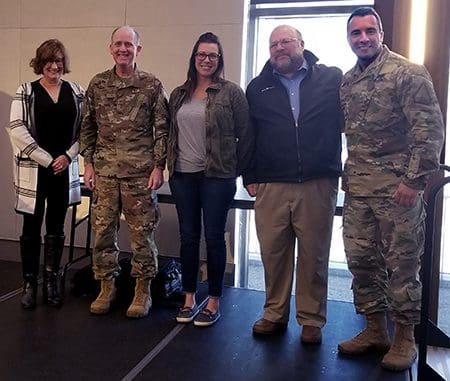 Foster was nominated for the Wortham award by his supervisors in the Wisconsin National Guard Recruiting and Retention Battalion.

“Staff Sgt. Jason Foster might be one of the kindest, most selfless human beings I have ever met,” said 1st Sgt. Christopher Beron, Foster’s supervisor with the Recruiting and Retention Battalion.

“I truly believe that what you do for others is the most valuable currency there is,” Foster said. “It feels great to give back as so many have given so much to me throughout the years.”

Foster — who deployed to Iraq in 2009-10 and to Afghanistan in 2012-13 — has volunteered as a Guardian on numerous Old Glory Honor Flights, escorting veterans from World War II, the Korean War and Vietnam War to monuments in Washington, D.C. He volunteers with the Boys and Girls Brigade in Neenah, and places wreaths on veteran gravestones at King Veterans Memorial Cemetery as part of Wreaths Across America. Last year he volunteered with the Salvation Army to bring hot meals to the less fortunate.

“I was able to meet a handful of such appreciative individuals during that time,” Foster said.

Last June Foster came across a story about River Nimmo, a 5-year-old in Camden, Arkansas who passed away from neuroblastoma. The young boy’s dream was to grow up to become an Army man, and the family asked service members to show up in uniform to honor young Nimmo. Foster and his girlfriend journeyed to the Nimmo home in September and presented the family with a U.S. flag that had flown in Afghanistan, along with a plaque that contained various challenge coins. 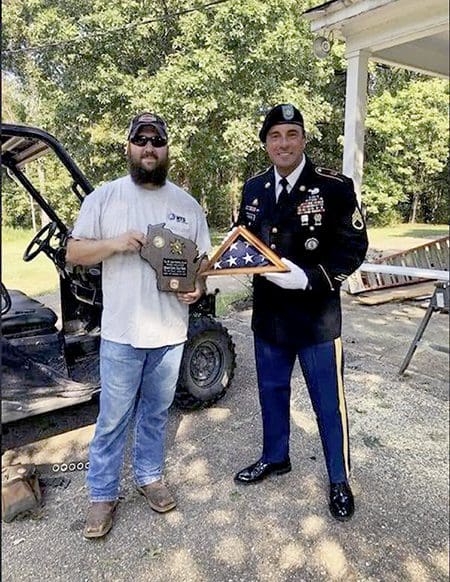 Colton Nimmo, father of 5-year-old River Nimmo, with a plaque and flag presented by Staff Sgt. Jason Foster of the Wisconsin Army National Guard, at the Nimmo home in Camden, Arkansas. Submitted photo

“It was an absolutely amazing experience, and the Nimmo family couldn’t have been more hospitable,” Foster said. “It was the very least we could do for a family that had gone through so much.”

Foster said he also found himself in the right place to lend a helping hand — buying gas for motorists stranded on the road, helping someone with their prescription co-pay, giving rides to individuals so they could save bus or cab fare.

“All of these are just simple acts that so many do throughout this great country,” Foster explained. “It’s done for no other reason but simply because it’s the right thing to do.

“Taking those few extra minutes here and there, you just never know the positive effect it can have on an individual,” Foster continued. “It could be that lift an individual needs to get back on the right track.”

Beron said Foster has an incredible passion for life, and is unafraid to share that passion with everyone he meets.

“As a leader, you can’t have enough Jason Fosters in your ranks — his positive can-do attitude is infectious,” Beron said. “As a fellow Soldier I am proud to know I get to serve with Soldiers like Staff Sgt. Foster. As a person, he gives me hope that as long as we have people like Jason, there will always be good in the world.”