Ceremony links new Soldiers with heritage of their units 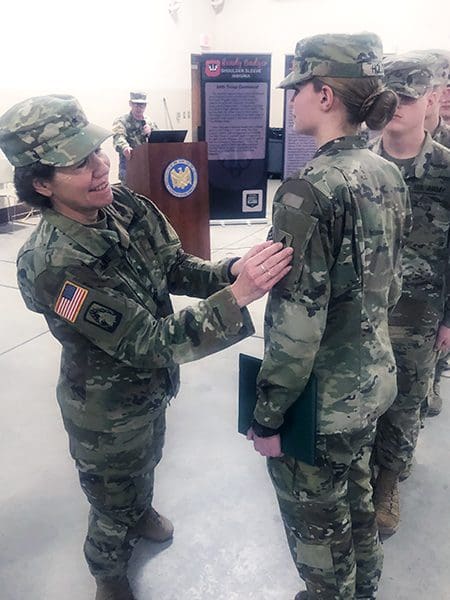 CAMP DOUGLAS, Wis. — Nearly 40 Soldiers completed the final steps of their initial training and prepared themselves both officially and symbolically to join their unit as fully trained members of the Wisconsin Army National Guard, ready to serve state and nation.

“Ready Badger Integration was established for the Soldier,” said Master Sgt. Daniel Halan of the Wisconsin Army National Guard’s Recruiting and Retention Battalion. “It allows Soldiers to arrive at their first drill medically ready, have their field equipment and are ready to integrate into their unit.”

State leadership, the Recruiting and Retention Battalion and the state’s units designed the monthly event to ensure that units received Soldiers ready to do their part when the Wisconsin National Guard is deployed for emergencies in the state or overseas with the U.S. Army. 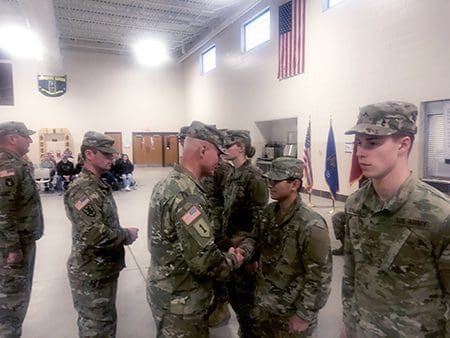 “We were finding that, while Soldiers returning from their Advanced Individual Training were ready to do their jobs, they often were lacking in some of the medical and administrative issues required by their unit in the field,” Halan said. “They also did not have their field equipment when they showed up for their first drill.”

“State leadership and a small committee was formed to determine how best to welcome these Soldiers into their formations as well as increase their readiness as they are handed off to their units,” said Maj. Seth Kaste, the WIARNG’s Recruiting and Retention Battalion’s executive officer.

Troops at Camp Williams conducted medical checks, received their field gear and conducted one-on-one briefings on education, retirement and health care benefits available to them as members of the Wisconsin Army National Guard.

“The Soldiers also had an opportunity to meet up with a representative from their unit,” Halan said 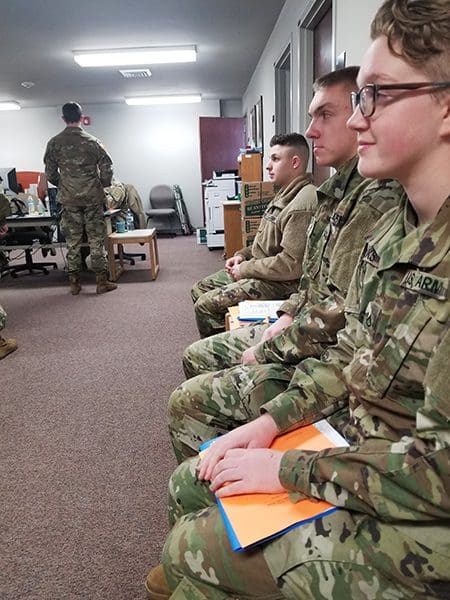 As part of Ready Badger Integration, Soldiers learned about the Wisconsin Army National Guard’s proud history as they received the shoulder patch worn by the members of the unit they would begin serving with next month.

“The patching ceremony is intended to instill pride in the Soldier as they become part of the Wisconsin National Guard and have a better understanding of the heritage behind the patch they will wear on their shoulder” Kaste said.

“The 32nd is the biggest brigade in the state,” Pvt. Garrett Sorstand of Oconomowoc, Wisconsin said after the ceremony, with his newly affixed 32nd Brigade “Red Arrow” patch on his shoulder. “I’ve read up on the 32nd’s history and am excited to be a part of it.”

Sorstand was the distinguished honor graduate of his training class, and will join Elkhorn’s Company A, 132nd Brigade Support Battalion as a supply specialist.

The Soldiers during the ceremony received words of advice from Wisconsin Army National Guard senior leaders.

“You have to be physically fit to operate as an effective Soldier in today’s U.S. Army,” said Command Sgt. Major Raphael Conde, the Wisconsin Army National Guard’s senior enlisted advisor.

Conde also thank family members who attended the ceremony for supporting their Soldier.

“It is extremely important as Soldiers that we have your support — we cannot do what we do without that support,” Conde said. “I want to thank you for support of your loved one while he or she serves both state and nation in the Wisconsin Army National Guard.”

“Not only do we need to be ready when our governor calls us to assist in Wisconsin in times of emergency, but also when the President calls us to deploy overseas.” Mathews said.

She also outlined some of the military’s intangible benefits.

“You will learn of a lot of benefits as you serve in the military,” Mathews said. “Some of them are soft skills such as hard work, flexibility, dedication and confidence that will serve you well throughout your lives.”

After the ceremony, the newly patched Soldiers met with leaders from their new brigade.

“We want to make your first drill with your new unit a good one so you can effectively serve our state and nation,” Lt. Col. Brion Aderman of the 32nd Infantry Brigade Combat Team told the Soldiers who will begin drilling with units in his brigade. “It is good to see that Red Arrow on your shoulder — its heritage dates back to World War I and it continues today in Afghanistan and the Ukraine.”

The 32nd Infantry Brigade Combat Team’s headquarters company is currently operating in Ukraine, and the 1st Battalion, 128th Infantry is deployed to Afghanistan.

The evening included a relaxed dinner and time to watch the Green Bay Packer football game. Both activities also symbolized the end of the introductory rigors of basic training and acceptance of fully trained and ready members of the Wisconsin Army National Guard.

“I am excited to meet my unit next drill and do my job,” said Pvt. Megan Holcomb of Cadot, Wisconsin. An engineering student at UW-Madison, Holcomb was also a distinguished honor graduate of her training class and will serve as a truck driver in Madison’s Company D, 132nd Brigade Support Battalion.