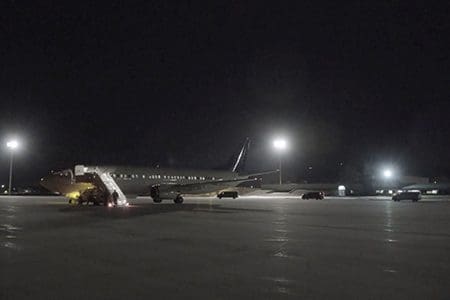 MADISON, Wis. — Twenty-nine Wisconsin residents who were aboard the Grand Princess cruise ship that docked at the Port of Oakland in California last week were safely transported back to Wisconsin late Sunday night, where Soldiers and Airmen from the Wisconsin National Guard were waiting to transport them back to their homes for self-quarantine.

This morning at 4:18 am the 29 Wisconsin passengers from the Grand Princess cruise ship were safely returned to their homes. Two passengers chose to remain in quarantine in Texas under the custody of the U.S. Department of Health and Human Services (HSS), citing personal reasons. State officials continue to work with HHS to return home the seven Wisconsin passengers who remain in HHS custody in California. The National Guard troops were given hotel rooms at their final destinations. 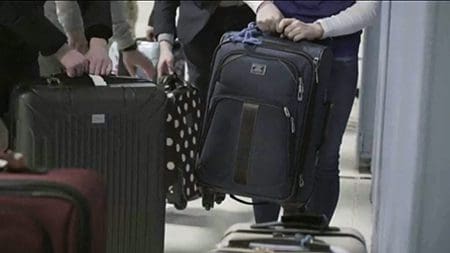 Gov. Tony Evers announced in a March 12 press conference that Wisconsin was working to bring the cruise ship passengers home after a weeks-long ordeal due to confirmed cases of COVID-19 Coronavirus aboard the ship. As of today, none of the returning Wisconsin citizens have tested positive for COVID-19 and all are asymptomatic, but the residents will follow Center for Disease Control and Wisconsin Department of Health Services protocols and continue to self-quarantine for the requisite 14-day period.

“We’re glad to finally have our folks back home in Wisconsin,” Gov. Evers said. “These individuals have gone through a harrowing experience full of uncertainty and fear over the past several weeks. But as I’ve said repeatedly, here in Wisconsin, we take care of one another. I am incredibly grateful to Wisconsin’s Department of Health Services, the Wisconsin National Guard, and our entire state government for the hard work they’ve put in to ensure we bring our people home safely and ensure the safety of our communities.” 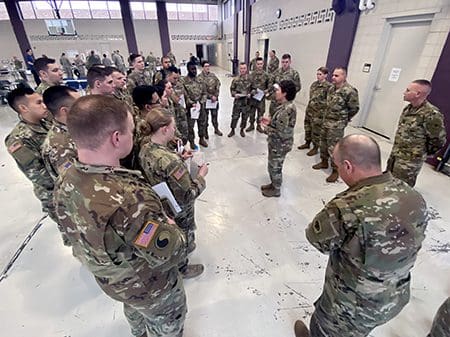 Brig. Gen. Joane Mathews, Wisconsin’s deputy adjutant general for Army, speaks March 12 to troops mobilizing for state active duty in response to the Wisconsin Department of Health Service’s request for assistance. The troops transported 29 Wisconsin citizens, who had been aboard a cruise ship with confirmed cases of COVID-19, to their homes for self-quarantine after they arrived in Wisconsin March 15. Wisconsin National Guard photo by Staff Sgt. Alex Baum

More than 3,500 people were on board the Grand Princess which had 21 total cases of COVID-19.

The return, although delayed in arriving, went smoothly. Adjutant General Paul Knapp spoke and welcomed our residents home on behalf of Gov. Evers. Residents received a welcome-home packet, which included a letter from the governor, information about their 14 days of quarantine, and how to contact their local health department or Wisconsin DHS if they had questions.

Nearly 30 Soldiers and Airmen from the Wisconsin National Guard mobilized to state active duty after the governor declared a public health emergency Thursday, and they were standing by to transport the residents home after they landed at the National Guard’s Volk Field Combat Readiness Training Center in Camp Douglas, Wisconsin. From there, Guard members transported them home in state vans. The Soldiers and Airmen involved will self-monitor for 14 days upon the conclusion of their mission.