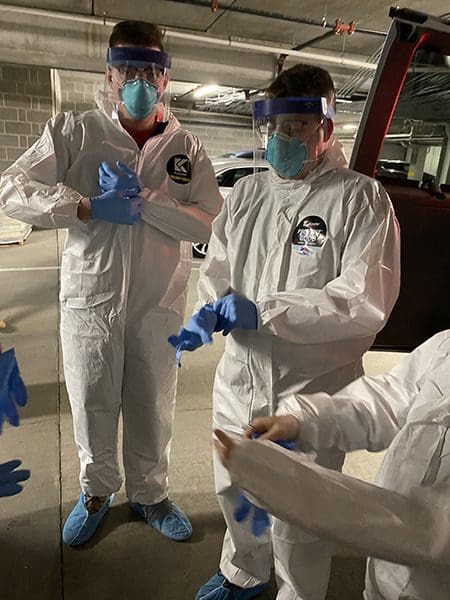 Wisconsin National Guard Soldiers and Airmen in their personal protective equipment at a senior living facility in Grafton, Wis., where six Guard medics are augmenting the staff. Wisconsin National Guard medics were dispatched to the senior living facility March 21 to temporarily alleviate a staffing shortfall due to confirmed cases of COVID-19 at the facility. Submitted photo

The team of four Citizen Soldiers and two Airmen will be in place for approximately three days while the facility works to identify a long-term staffing solution amidst the COVID-19 pandemic.

The Wisconsin National Guard received the request for assistance after the facility reported its first COVID-19 death as well as additional confirmed cases among staff and residents there.

Serving in this sort of scenario is an example of how the Wisconsin National Guard fulfills one of its core missions of serving the local communities its Citizen Soldiers and Airmen call home, while helping their neighbors and fellow citizens. 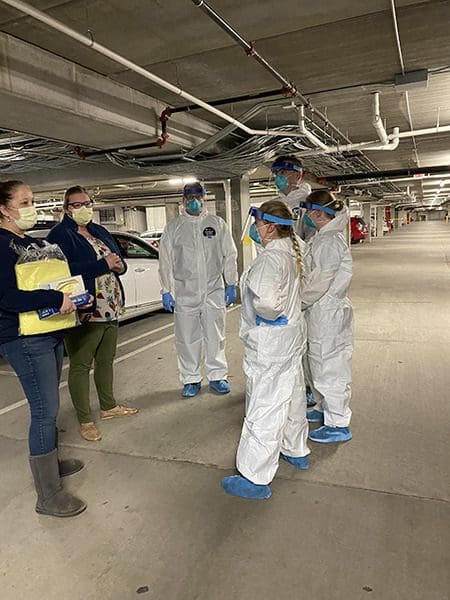 Wisconsin National Guard Soldiers and Airmen in their personal protective equipment consult with staff at a senior living facility in Grafton, Wis., where six Guard medics are augmenting the staff. Wisconsin National Guard medics were dispatched to the senior living facility March 21 to temporarily alleviate a staffing shortfall due to confirmed cases of COVID-19 at the facility. Submitted photo

“I think this is why we joined the military, and why we’re part of the National Guard,” said Capt. Heather Schaller, a nurse assigned to the Wisconsin Army National Guard’s Medical Detachment in Camp Douglas, Wisconsin who is serving as the officer-in-charge of the mission in Grafton. “A lot of citizens don’t know that the National Guard does stuff like this, so that is kind of an eye-opener too.”

Schaller, who is also a nurse in her civilian occupation at a Milwaukee hospital said this is just another example of how the Guard is here to serve Wisconsin communities during times of need. She said that while she knows that she also fills a critical role in her civilian profession, she can be of great assistance in other areas when she puts on her uniform and fulfills her duties in the National Guard.

“It’s cool that my job could give me up in order to do something like this and support the National Guard as well,” she said.

Schaller said her and her team are honored to be a part of the state’s response to the COVID-19 pandemic.

With personal protective equipment (PPE) at a premium, the Wisconsin National Guard personnel dispatched to the facility are using their own military-provided PPE, in hopes of helping preserve the limited amount of PPE available to the medical community. Not only does it help preserve PPE stock for civilian medical providers, it is also the equipment with which National Guard troops are accustomed to using and regularly train.

Wisconsin National Guard troops previously assisted with the state’s COVID-19 response by transporting a group of Wisconsin citizens to their homes who were returning from a cruise ship with confirmed cases of COVID-19. Those individuals returned to Wisconsin on two separate flights into Volk Field Combat Readiness Training Center in Camp Douglas, after a weeks-long ordeal where Wisconsin National Guard troops were waiting to take them home.

The Wisconsin National Guard continues to work closely with partner state agencies to anticipate other needs and potential requests for assistance. The more than 300 Wisconsin National Guard troops mobilized to state active duty are currently preparing for potential missions that could include specimen collection at mobile testing sites, transporting supplies or equipment, logistics support, and additional medical support to communities.