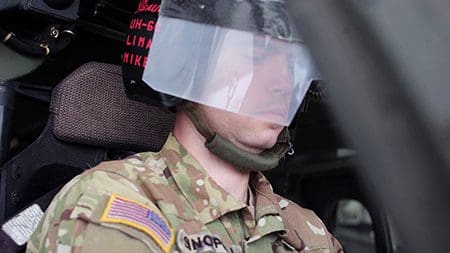 1st Lt. Nick Sinopoli, a pilot with the Wisconsin Army National Guard’s 1st Battalion, 147th Aviation, wearing one of the versions of his ICARUS Devices — a visor that can shift from clear to obscured to help pilots learn to transition from visual to instrumental flying when their visibility outside the aircraft is suddenly limited. Still capture of Wisconsin National Guard video image by Sgt. Alex Baum

There’s a new life-saving device developed by a Wisconsin Army National Guard officer. It’s an idea that creator 1st Lt. Nick Sinopoli — a pilot with the 1st Battalion, 147th Aviation Regiment in Madison, Wisconsin — believes could have helped during tragic helicopter crashes like the one that claimed the life of Kobe Bryant.

The device helps helicopter pilots learn to maintain control of their aircraft when they hit dangerous weather conditions. It’s now among the top 16 entries in this year’s National Guard Innovation Competition.

This device consists of a visor that wraps around the pilot’s face, and an electronic controller which are worn during flight. It does not obscure vision until an iPad or smartphone app used by the instructor changes the visor’s opacity from clear to partially or fully obscured. This provides a more realistic simulation of clouds or fog where zero visibility can occur instantly, or where smoke from inside the aircraft can impede a pilot’s vision. When this occurs, pilots need to easily transition from visual flight rules (VFR) to instrument flight rules (IFR).

“Simply put, IFR means relying on the instruments for control and navigation of the aircraft, while VFR requires you to be able to look outside to control the aircraft and navigate,” Sinopoli said.

Sinopoli, who began his seven-year military career with the U.S. Navy before joining the Wisconsin Army National Guard, said the standard practice of pilots putting on and taking off hoods to obscure visibility, or the trainer putting his hand in front of the trainee’s face, detracts from the transition training.

Sinopoli is motivated by more than dissatisfaction with current training methods — he said he lost a friend to a spatial disorientation helicopter accident. He sold his car to pay for the patent for the device, and has spent many long nights over the years developing prototypes of the ICARUS device.

“Winning the National Guard Innovation Competition would create a path to getting the device into our cockpits, improving training and finally ending these tragic accidents,” Sinopoli said. “Every branch of the military flies helicopters in challenging environments. I think it would be really cool if the National Guard could lead the way on innovative weather training.”

Sinopoli said beta tester of the device are currently being tested at flight schools in Detroit, Hawaii and with the FAA.

Judging for the semifinal round of the National Guard Innovation Competition will wrap up May 12. The final round will be held in June. Sinopoli’s submission was one of 112 from all 54 states and territories.