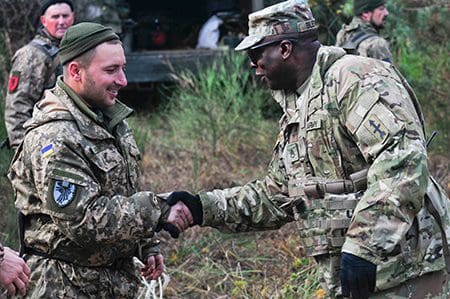 Soldiers with the Wisconsin Army National Guard’s 32nd Infantry Brigade Combat Team have been working alongside troops from other NATO nations since November 2019 as part of Joint Multinational Training Group-Ukraine to train members of the Armed Forces Ukraine. JTMG-U photo

Wisconsin Army National Guard Soldiers serving in Task Force Juvigny are continuing with their mission to train and advise members of the Armed Forces Ukraine even in the midst of a global coronavirus pandemic.

The approximately 160 Soldiers — many from the 32nd Infantry Brigade Combat Team’s Headquarters Company — arrived at Ukraine’s Combat Training Center-Yavoriv last November to head up the Joint Multinational Training Group-Ukraine (JMTG-U), an effort that includes NATO allies from Canada, Denmark, Great Britain, Lithuania and Poland. The goal of the training is to improve NATO interoperability with Ukraine’s military. 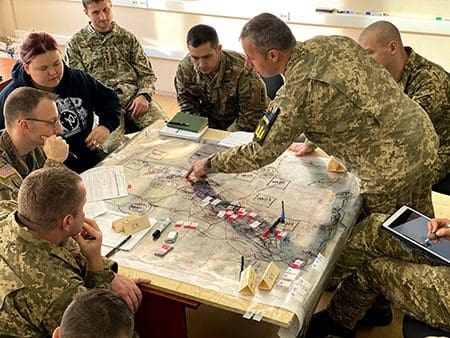 Meanwhile, more than 1,400 Citizen Soldiers and Airmen are on duty serving in Wisconsin as part of the state’s ongoing COVID-19 pandemic response. 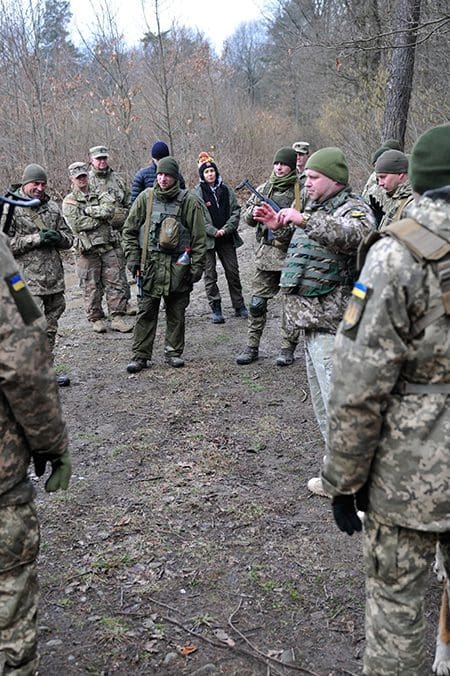 “How that’s achieved changes, based on critical events and assessments,” McAuliffe said. Initially, he measured progress by the ability to train such concepts as the military decision-making process, military staff processes and tactical operations center execution.

“If not fully accomplished, I believe that it is close,” McAuliffe said. “I also believe that we’ve developed sound benchmarks for greater institutional development.” 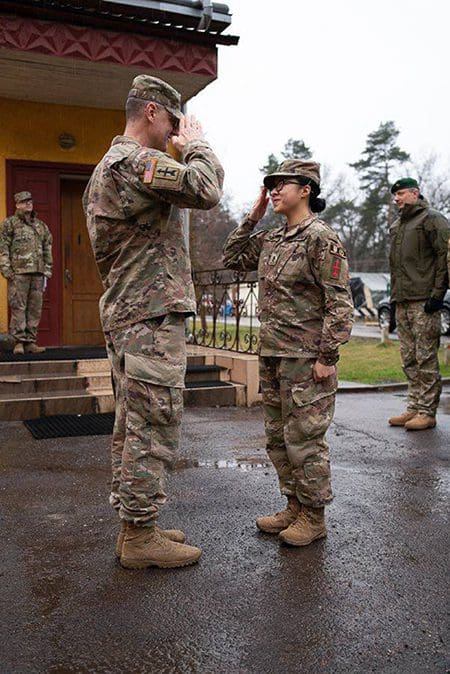 Capt. Adam Deal, a company advisor from Waupun, Wisconsin, works closely with the combat training center staff to improve processes and the quality of training provided to the units who rotate through the center.

“The hardest part has been the inability to advise in the field due to COVID-19,” Deal said. “As company advisors, we make our biggest impact in the field working with the observer/controller/trainers. Not being able to see them on a regular basis has made rapport-building and the ability to provide recommendations and feedback difficult.”

In addition to limiting face-to-face interactions between trainers and Ukrainian military officials, safety precautions have placed other restrictions on Task Force Juvigny. Regular mail delivery has stopped, and scheduled leave and passes are suspended. Gyms and barbershops are closed, and recreational trips to nearby Lviv in western Ukraine are also suspended.

“I would really like to have been able to enjoy the area more,” Wolfertz conceded. “However, these are extraordinary times, and our safety is more important. Not so much different from previous deployments, now.”

“I made it a ritual to get pho” — a traditional Vietnamese noodle soup — “in town at one of the only pho places I’ve come across in Ukraine,” Vue said. “This gives me a taste of home and always reminds me of how grounded I am to my [Hmong] identity and my family back home.”

Sgt. 1st Class Kirsten Schultz, an operations advisor from Marinette, Wisconsin, said she is trying to make the best of the restrictions.

“I’ve been trying to not let that get me down,” she said. “I have been telling myself that it is mission first, and that is the sole purpose we are here.”

Schultz and Vue described themselves as introverts, so social distancing has not necessarily been detrimental for them. Dietzler said he is more conscious of his proximity to others as well as the number of people in a room. Deal said he is a big fan of personal space.

“Six feet of separation is perfectly fine with me,” he said.

Wolfertz acknowledged that social distancing requirements at the combat training center has been challenging, “but as with anything, it becomes routine,” he said.

McAuliffe also indicated the pandemic has proven to be the toughest part of this deployment, but provided a stoic response.

Col. John Oakley, the 32nd IBCT and Joint Task Force Juvigny commander, said that the prevention measures taken in Ukraine have thus far resulted in no Soldiers contracting the coronavirus.

“I want [the family members back home] to know that there’s one less thing that they need to worry about, and that’s the safety and security of their Soldiers here,” Oakley said in a video posted in the Joint Task Force Multinational Group-Ukraine Facebook page.

Schultz enjoyed working with her Ukrainian counterparts on this deployment.

“It was, and is, a really cool experience to be able to see their ways of teaching and how they tackle the tasks they have to teach and observe,” she said. “There is more than one way to do tactics and how to teach it. They were very receptive to see how we do things, and I feel we all have learned another way of doing things with observing how they teach.”

Deal said working with Ukrainians has been the best part of the deployment.

“I have gained valuable insight into the tactics and methodologies of how they conduct operations,” Deal said. “Although we may differ in how we would approach a certain tactical problem, I feel confident that we would be able to work together in a joint effort.”

Schultz said that linguists are not always available to translate English into Ukrainian, and vice-versa.

“Trying to communicate at times has been difficult,” she said.

“It’s interesting to hear during our discussions, through a linguist, how similar our challenges are,” Dietzler said. “All of the interactions with my counterparts have been genuinely cordial.”

Wolfertz said his experience working with Ukrainian counterparts at range control has been delightful.

“I’ve learned a great deal about how the Ukrainian forces do business,” he said. “The biggest difference I’ve noticed is that the information flow is a very top-down approach, versus the approach the U.S. Army uses.”

Staff Sgt. Joshua Saffert, s Cameron, Wisconsin resident, and an executive assistant to the chief of staff, said meeting the Ukrainian people and experiencing their culture has been the most rewarding part of his deployment.

“I have had the opportunity to be part of Ukraine’s future,” he observed. “As big or small a part that is, I am here and part of that — no one can ever take that away.”

“I feel we will leave [the combat training center] better than we found it,” Harder said.