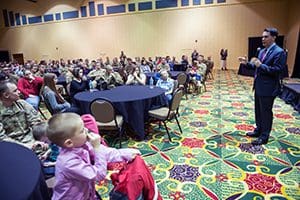 Gov. Scott Walker and senior Wisconsin National Guard leaders were on hand for a Freedom Salute ceremony Feb. 7 in Middleton, Wisconsin. The ceremony honored the service and sacrifices made by Soldiers of three Wisconsin Army National Guard units that returned home in December.Soldiers from Battery A, 1st Battalion, 121st Field Artillery, a high-mobility artillery rocket system (HIMARS) unit based in Sussex, Wisconsin, returned home in December with 41 Soldiers. Approximately half of the unit remains deployed in Afghanistan. They are expected to return home by the end of February.Nearly 160 Soldiers from the Chippewa Falls, Wisconsin-based 829th Engineer Company were mobilized and deployed to Afghanistan in support of Operation Enduring Freedom to conduct retrograde operations as part of the larger drawdown of U.S. forces in the region.
read more