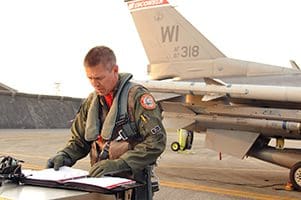 KADENA AIR BASE, Japan — A Wisconsin Air National Guard pilot currently deployed to Kadena has just completed a milestone in his career, joining an elite group of just 250.Lt. Col. Matthew C. McCunn — of the Madison, Wisconsin-based 115th Fighter Wing — completed a flight here taking him over a career total of 3,000 flight hours.Upon landing, McCunn was surrounded by friends and family — including his sons Senior Airman Alex McCunn and Airman 1st Class Nathan McCunn, who are also deployed to Kadena with the 115th Fighter Wing — as he became soaked in water from the traditional hosing down for his accomplishment."In the fighter community, we accumulate flying hours at a fairly slow rate, and a little slower in the Guard than on active duty," McCunn explained, noting that he averages around 100 sorties per year and averages 1.3 hours per sortie. While flying careers can be cut short as a result of changing military assignments, McCunn has spent his entire career as an F-16 pilot.
read more