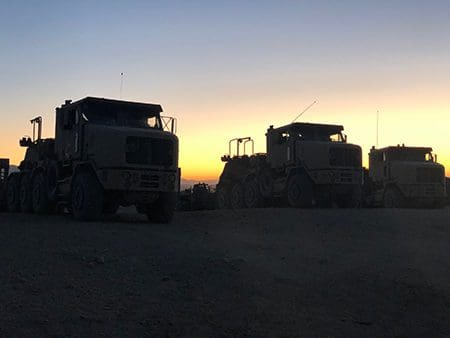 Factor in the COVID-19 pandemic, and the difficulty level increases considerably.

“COVID had the biggest impact on this training, due not only to complications of Soldiers’ health coming into training, but the logistics of attempting to train in a healthy manner,” explained 1st Lt. Gabriella Jacobsen, commander of the Wisconsin Army National Guard’s 1158th Transportation Company, which just completed training at the National Training Center in early August. “To assist in actually execute the training, COVID mitigation plans began early and were changing on a daily basis up to execution.”

The National Training Center paused training from March through June due to the pandemic, and the 1158th was part of the first training rotation there since training resumed. Along with the Wisconsin Army National Guard’s 107th Maintenance Company and the Michigan Army National Guard’s 1225th Combat Support Sustainment Battalion, they supported the 34th Infantry Division’s 1st Armored Brigade Combat Team (ABCT).

“[We were] hand-selected by the ABCT because of our previous support of their Fort Hood rotation,” said 1st Sgt. Derrick Sailer. The 1158th helped bring the 1st ABCT’s armored vehicles to the National Training Center, and conducted transportation and recovery operations there.

The 1158th actually had two rotations at the National Training Center, though it played more of a behind-the-scenes role in the first rotation. During the second rotation, the 1158th encountered simulated indirect fire, chemical, aerial and small arms fire attacks as it supported the 1st ABCT.

The National Training Center set up COVID mitigation protocols, which included keeping training units in the training area. Soldiers arriving at Fort Irwin were medically screened, and anyone showing COVID symptoms was sent to a designated billeting area for testing. Soldiers who tested positive were isolated for a minimum of 10 days, and needed to be symptom-free for three days and test negative on two COVID tests to return to duty. “Almost half of the troops we sent have been quarantined at some point,” Sailer said, even though Soldiers had been tested for COVID-19 at Fort Knox before heading to Fort Irwin. “From a higher leadership level, it has been a logistical training camp, from Soldier tracking to equipment routing.”

2nd Lt. Brandon Squires said that the pandemic resulted in some Soldiers being sent home and impact to missions. While morale remained high, he acknowledged it suffered a little as troops navigated the challenges of training in such a constrained environment.

“Some Soldiers were feeling like they weren’t getting enough training value overall,” Squires said. “I personally got quite a bit from this training.”

Squires said the scale of this training opened his eyes — the effort and planning required to coordinate nine units from seven states.

“This was our first time ever meeting, much less training together,” Squires said. “It showed me how the moving pieces can come together and accomplish a mission.”

The training also helped Squires and other platoon leaders understand their role on the battlefield as supporting elements for troops and the complexities of moving equipment to the front lines and back.

“We’re trying to take lessons learned with that exercise, as well as using the evolving guidance from the state and CDC, and apply them to conduct [weekend drills] in the healthiest way moving forward,” Jacobsen said.

“Adapting to real-world mission complications, whether they like it or not, will build a strong leadership foundation for their future,” he said.