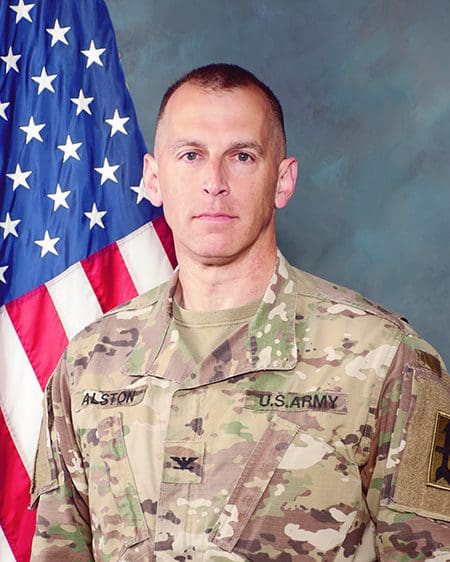 CAMP DOUGLAS, Wis. — A new commander is at the helm of the famed 32nd “Red Arrow” Infantry Brigade Combat Team.

Alston, a native of Monroe, Wisconsin, earned his commission in 1992 from the Reserve Officer Training Corps at the University of Wisconsin-Madison. He began his career as a tank and later scout platoon leader in Troop E, 1st Squadron, 105th Cavalry before becoming a platoon leader and company executive officer for Company A, 1st Battalion, 632nd Armor. He’s since served in a variety of command and staff positions throughout the Wisconsin National Guard including stints as the commander of the 32nd Infantry Brigade Headquarters Company, the commander of the Headquarters Company for the 2nd Battalion, 128th Infantry, and the commander of Company A, 2nd Battalion, 128th Infantry. Later, he commanded 1st Squadron, 105th Cavalry, the 32d’s primary reconnaissance unit– a post he held from October 2012 to July 2015.

“I’m humbled and absolutely honored to take command of such an outstanding unit,” Alston said. “The Red Arrow has a storied lineage and a place of honor in our state’s military history, and I look forward to helping write the next chapter in that history with the incredible Citizen Soldiers that make up this brigade.”

In a full-time capacity, he has served in various information technology roles in the Joint Force Headquarters-Wisconsin’s Directorate of Information Systems and in 2015 became the director for that department.

He has a bachelor’s degree in International Relations with a concentration in American Foreign Policy and Global Security and holds two master’s degrees – one in Information Technology, and another Strategic Studies from the U.S. Army War College.

Alston resides with his wife and two children in Windsor, Wisconsin.

He assumes command of one of the nation’s most storied National Guard units. The Red Arrow traces its origins to the American Civil War when its units made up part of the famed Iron Brigade that went on to serve heroically in many engagements throughout the war. The 1st and 2nd Wisconsin Volunteer Infantry Regiments earned battle streamers at places like Bull Run, Fredericksburg, Antietam, Chancellorsville, Cold Harbor, Spotsylvania, and Gettysburg, among many others. Those streamers still adorn the brigade’s colors today.

The same units would later serve in the Spanish-American War before reorganizing at the outset of World War I when the 1st and 2nd Wisconsin Volunteer Infantry reorganized as the 127th and 128th Infantry within the newly formed 32nd Division.

The division earned its now famous “Red Arrow” moniker on the battlefields of war-torn France in World War I, after it pierced every enemy line it encountered during the war including the famed Hindenburg Line. The 32nd earned the Croix de Guerre from the French government for its tenacity in combat in addition to its nickname, “Les Terribles.”

It again played a key role in the Pacific Theater during World War II as it fought its way through brutal campaigns in New Guinea and the Philippines en route to 654 days in combat – more than any other division in the war.

The division mobilized again in the early 1960s at the height of the Berlin Crisis and spent a year on active duty preparing for war in Europe before it reorganized in 1967 as a brigade. Since that time, the 32nd Infantry Brigade has played a pivotal role in fulfilling the Wisconsin National Guard’s dual mission as the primary combat reserve of the Army and as the state’s first military responder during emergencies.

The Red Arrow and its units mobilized numerous times during the Global War on Terror including in 2009 when the entire brigade deployed to Iraq. Elements of the 32nd have mobilized countless times to support civil authorities during domestic emergencies in Wisconsin and elsewhere as well including in 2017 when the entire brigade mobilized in support of Florida during Hurricane Irma. More than 600 Red Arrow Soldiers ultimately deployed to Florida to assist civil authorities with security, traffic control, and humanitarian assistance.

Alston replaces Oakley, who recently returned from an overseas deployment as the commander of Joint Multinational Training Group-Ukraine. Oakley commanded the Red Arrow for three years and oversaw several major training events including when the entire brigade completed an Exportable Combat Training Center rotation to Camp Grayling, Michigan in July 2018, and large-scale deployments of the brigade’s two infantry battalions to Afghanistan, as well as the brigade headquarters deployment to Ukraine.