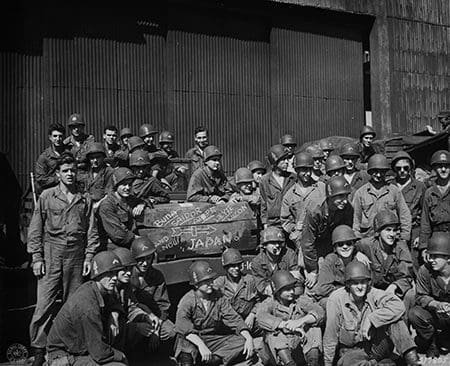 Part 1: The end of the war, the beginning of a series

The walkie-talkie said, “The war’s over.”

The grimy sergeant from A Company flicked the butterfly on the mike and said, “Yeah, all over these damned mountains.”

It was the morning of Aug. 15, 1945. For the book, it was the 32nd Division’s 654th — and last — day of combat in World War II. But not for the men of A Company. One dough was dead and two were wounded. The platoon was cut off. Back through the mountains at B Company, 11 miles by trail, 1st Lt. Troy Ricks, one-time baseball star from Boonesville, Miss., said, somewhat grimly, “There’s no celebrating here. This is the 32nd. We always fight after campaigns are over,” which made him somewhat of a prophet.

Less than 18 hours later, A Company was hit by another banzai. Another dough was killed and seven were wounded.

Back at the divisional public-relations office, Capt. William A. Fleischer, of New York City, said, “That’s the 32nd — first to start fighting, last to finish.” (From “The Red Arrow Pierced Every Line” in the Nov. 10, 1945 issue of The Saturday Evening Post)

Seventy-five years ago, on Sept. 2, 1945, representatives of the Japanese Empire signed a document called the Instrument of Surrender, formally ending World War II.

The fighting in the South Pacific during World War II is often overshadowed by the fighting in Europe, and in truth the United States directed more of its wartime resources toward defeating the Third Reich. The 32nd “Red Arrow” Division, which earned its name fighting against Germany in World War I, was originally slated to return to Europe before a late decision by the War Department sent it to defend Australia against the Japanese military. 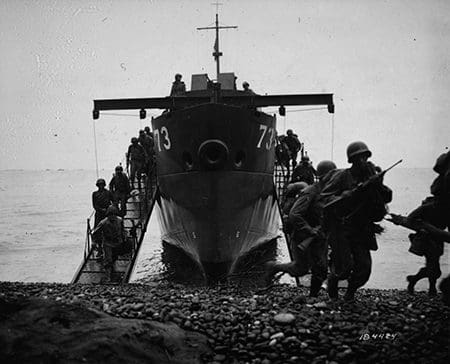 The 32nd Division, made of men from the Wisconsin and Michigan National Guard, was the first U.S. division to fight the Japanese, and learned the hard way the hard lessons of an insufficiently trained, under-supplied unit waging jungle warfare against an entrenched enemy determined not to surrender. It would also be the first to be airborne into combat, to make a beach landing and to supply multiple battalions in combat by airdrop.

The Red Arrow participated in the Papuan campaign (September 1942-January 1943), which consisted of the battles for Buna-Gona and Sananda; the Western New Guinea campaign (January-November 1944), which included the battles for Saidor, Aitape, Biak and Morotai; the Southern Philippines campaign (November 1944-January 1945), centered on Leyte; and the Luzon campaign (January-May 1945) featuring the Villa Verde Trail. The division would also participate in the post-war occupation of Japan from September 1945-February 1946. During the course of the war it would suffer 1,613 killed in action, 5,627 wounded, 27 missing in action, and one prisoner of war. 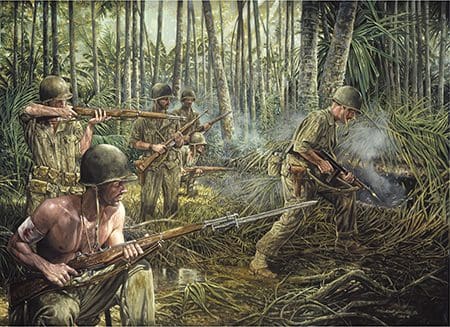 This National Guard Heritage Painting, “Red Arrow at War” by Michael Gnatek, depicts the 32nd “Red Arrow” Division during the Buna campaign in Papua New Guinea in December 1942. In the terrible heat and drenching rain the men of the 32nd, many of them burning with fever, had to reduce Japanese positions one at a time, usually by rushing them with grenades. The fall of Buna in January 1943 was the Japanese Army’s first defeat in modern history. Today the Red Arrow heritage continues with the 32nd Infantry Brigade Combat Team.

The 32nd Division would amass 654 days in combat during World War II — more than any other division in the war. To commemorate the 75th anniversary of the conclusion of World War II, the Wisconsin National Guard will publish articles recounting the Red Arrow’s journey from pre-war training to its baptism of blood in Buna, the remainder of its fighting in New Guinea and the campaigns in the Philippines.

The 32nd Division no longer exists today, but its proud heritage continues with the 32nd Infantry Brigade Combat Team.