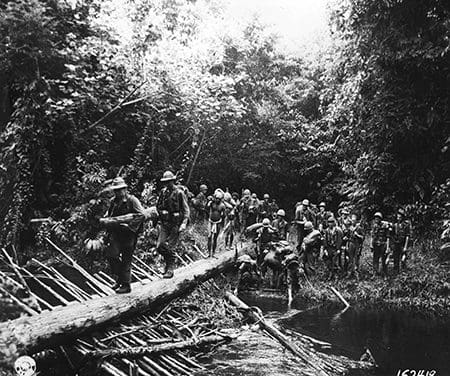 Part 3: Buna, the baptism of blood

The 32nd “Red Arrow” Division, consisting of the Wisconsin National Guard and much of the Michigan National Guard, had spent much of 1941 training for war in Europe. The division spent a good portion of 1942 travelling — across the United States, across the Pacific, and across Australia — when it was unexpectedly diverted to fight the Japanese who had reached New Guinea on their advance toward Australia.

The 32nd Division was led by Maj. Gen. Edwin Harding, a former infantry instructor at Fort Benning, Georgia who literally wrote the book on achieving military objectives without resorting to costly frontal assaults. Gen. Douglas MacArthur, commander in chief of the Southwest Pacific Area, had previously experienced the seemingly unstoppable Japanese advance in the Philippines, and now was tasked with defeating the Japanese even as much of the U.S. military’s resources were directed to the war in Europe. 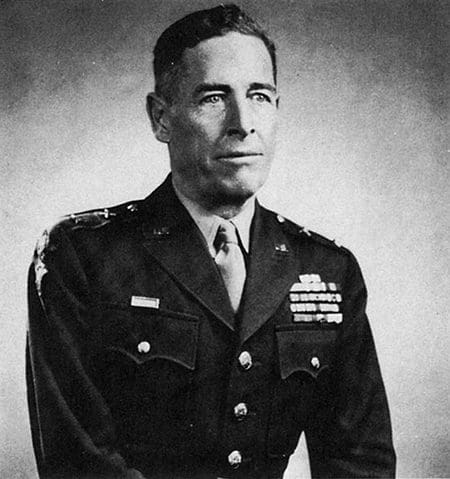 MacArthur was aware the two American divisions he had — the 32nd and the 41st — were insufficiently trained, equipped and manned. He also lacked other military equipment and assets he desired to prosecute a military campaign against the Japanese. But with the Japanese landing on Buna on the northern coast of Papua New Guinea and Milne Bay on the southeast tip in June and advancing down the Kokoda Trail toward Port Moresby, MacArthur had no more time to offer the Red Arrow, and no sympathy for their hardship.

Led by Company E, 126th Infantry Regiment on Sept. 15, 1942, the 32nd Division — minus the 127th Infantry Regiment — began a two-week move by air and sea to Port Moresby, Papua New Guinea. For some Red Arrow Soldiers, the move came so swiftly that the camouflage dye on their fatigues was still wet when they boarded the aircraft. While Australian soldiers pushed the Japanese back up the Kokoda Trail, MacArthur and Gen. Sir Thomas Blamey — commander in chief of the Australian military forces, and commander of Allied land forces under MacArthur — decided the 32nd Division should envelop the Japanese to the east of the trail and engage them at Buna. 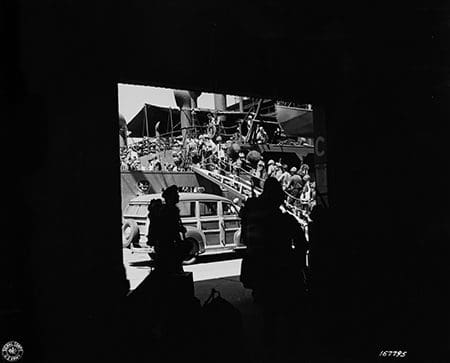 The majority of the 32nd Division in New Guinea moved north by air — the first such large-scale troop movement by air for the U.S. Army. The 2nd Battalion, 126th Infantry, however, was tasked with taking the Kapa Kapa Trail across the Owen Stanley mountain range — a torturous trek that would leave them gaunt, weakened, hungry yet sickened with dysentery, resembling the specters that New Guinea natives claimed haunted the “Ghost Mountain.”

“It was the eeriest place I ever saw,” Lt. Paul Lutjens later wrote in his diary. “The trees were covered with moss a half a foot thick. We would walk along a hogback, straddling the trail, with a sheer drop of thousands of feet two feet on either side of us. We kept hearing water running somewhere, but we couldn’t find any. We could thrust a stick six feet down in the spongy stuff we were walking on without hitting anything real solid. It was ungodly cold. There wasn’t a sign of life. Not a bird. Not a fly. Not a sound. It was the strangest feeling I ever had. If we stopped, we froze. If we moved, we sweated.”

Ironically, as the 2nd Battalion made its torturous trek, MacArthur learned that airstrips could be built north of the Owen Stanley mountains. The remainder of the 126th Regiment as well as the 128th Regiment took less than an hour to fly over terrain that took the 2nd Battalion a harrowing 42 days on foot. 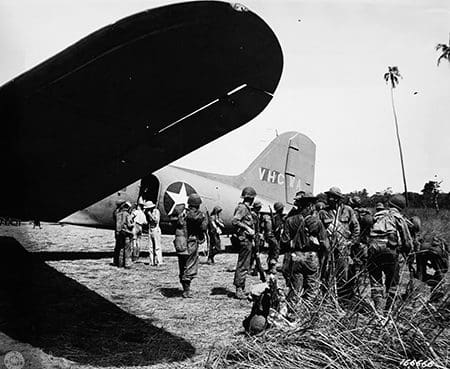 The very terrain of Papua New Guinea proved a formidable challenge in its own right. Teeming with biting insects, venomous snakes and crocodiles, the landscape consisted of swamps, swollen rivers, deep mud, steep climbs, dense foliage and tropical diseases that sapped Red Arrow Soldiers of their health and strength.

The Japanese army was also tormented by the terrain, hungry and weak from illness. But they were far from the pitiful band of starving soldiers described by American intelligence reports — reports MacArthur relied on for his battle plans. The Japanese had reinforced their troops in the Gona/Buna area of New Guinea, and had expertly built fighting positions that took full advantage of the terrain to funnel advancing troops into avenues of destruction. Their complex network of fortified and camouflaged positions were complemented by snipers hiding high up in trees. Their concealment was so effective that American surveillance determined the area to be lightly defended.

At this stage of the war in the South Pacific, American military resources were relatively scarce. The Navy had its hands full at Guadalcanal, and could not accommodate MacArthur’s request for naval guns or landing ships. The Army Air Corps assured MacArthur that aerial bombardment would be more effective than artillery, though the jungle canopy and Japanese camouflage would prove that boast to be hollow.

“I want to bring back as many of the Red Arrow lads with me as I can,” Harding wrote his wife. “That ambition won’t be furthered if we move before we are good and ready to go.” 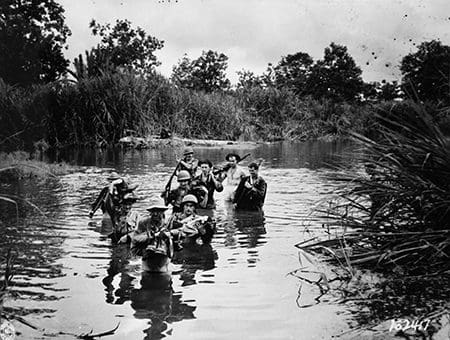 Col. Herbert A. Smith, commander of the 32nd “Red Arrow” Division’s 2nd Battalion, 128th Infantry Regiment, and some of his Soldiers wade across the Sarau River as they make their way from Biamu to Embogo, New Guinea Nov. 15, 1942. U.S. Army Signal Corps photo

But ready or not, the Red Arrow was the first U.S. unit to initiate an offensive action against the Japanese army. That first contact was a stinging rebuke. Low on supplies due to an earlier Japanese air raid, little artillery support, an entire regiment loaned to the Australians and operating on faulty intelligence — MacArthur still believed the 32nd was contending with a wretched infirmary of Japanese soldiers — the division learned the first of many hard lessons.

MacArthur, however, thought the lesson was that the Red Arrow was not fighting hard enough.

“Take Buna today at all costs,” he told Harding in a merciless Nov. 22 order. 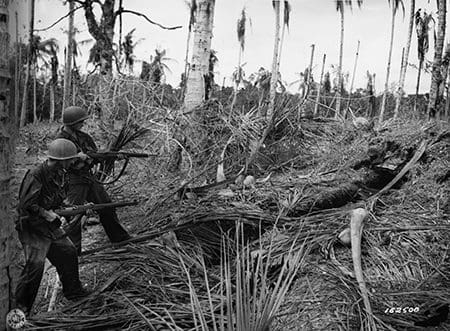 Over the course of the next several days, augmented with the “Ghost Mountain Boys” of the 2nd Battalion, 126th Infantry, the Red Arrow slowly advanced on the Japanese, paying a heavy price for each foot of ground gained. But what gains the Red Arrow achieved were not enough for MacArthur, who sent Lt. General Robert Eichelberger to replace Harding on Nov. 30. 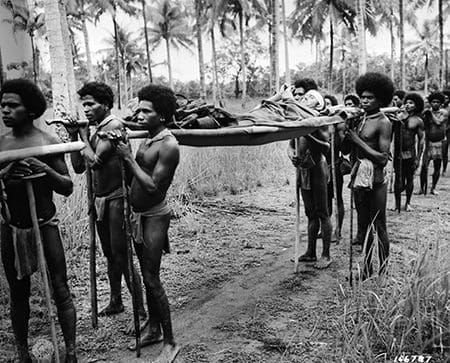 Harding was relieved of command of the Red Arrow on Dec. 2, 1942. Many of the supplies and equipment Harding had requested and done without in New Guinea, as well as the 127th Infantry Regiment, began to arrive after Eichelberger took command. Red Arrow Soldiers enjoyed their first hot meal in weeks. As fortunes were improving for the Red Arrow, Japanese forces at Buna were running low on supplies and morale. Still, the enemy had the advantage of superior fighting positions built to withstand mortar and artillery attacks — and as their situation became more desperate, suicide squads were organized to attack the Red Arrow.

The 32nd Division — after weeks of on-the-job training in jungle warfare — was beginning to show the results MacArthur demanded, but at considerable cost. The “Ghost Mountain Boys” battalion had nearly 900 Soldiers when it crossed the Owen Stanley mountains, but in the push to take Buna now numbered fewer than 300. As the grim fighting continued at Buna, the Australians took Gona on Dec. 9. A week later, troops from the 127th Infantry Regiment took Buna Village, and two days after that Soldiers from the 128th Infantry Regiment took Coconut Grove.

But the Japanese continued to whittle down the Red Arrow Soldiers as they pressed forward, driven by MacArthur’s order to take Buna or die trying. Even so, every Red Arrow approach was repulsed by heavy machine gun and sniper fire. Two Soldiers from the 127th would posthumously receive Medals of Honor for their actions on Christmas Eve, 1942 — 1st Sgt, Elmer Burr, who fell on a hand grenade to save the life of his captain, and Sgt. Kenneth Gruennert, who used hand grenades to clear out two Japanese fighting positions before a sniper killed him. These were the first Medals of Honor awarded to the Red Arrow in World War II.

By Jan. 2, 1943, Buna had fallen to the Americans and the Australians. Soldiers from the 127th took part in capturing Sanananda on Jan. 22. The Red Arrow, and American troops, had won their first ground campaign against the Japanese in the South Pacific. 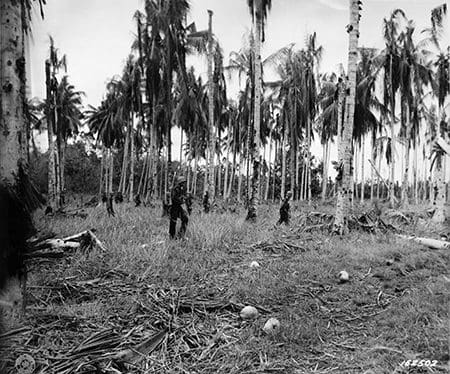 Writing later about this part of the war, Eichelberger acknowledged that the Red Arrow did the best it could given its considerable disadvantages.

“Any historian will be hard put to discover in this war a division which earned, and deserved, so many citations and decorations for individual bravery,” Eichelberger wrote.

When MacArthur changed his tactics to bypass fortified enemy positions — instead focusing on attacking Japanese supply chains to weaken their ability to fight — he essentially conceded that Harding’s plan would have taken Buna with far fewer casualties.

The first four months of combat were not kind to the Red Arrow. By the end of the Buna campaign, nearly 9,700 of the approximately 11,000 Red Arrow infantry Soldiers were casualties. Of those, 7,125 were due to illness, nearly 1,700 were wounded, and 690 killed. The division would return to Camp Cable, Australia to recover, train, gain new Soldiers and prepare for a return to New Guinea, beginning with Saidor.

The Red Arrow Division would spend 654 days in combat in the South Pacific — more than any other division during World War II. Bloody Buna was only the beginning.