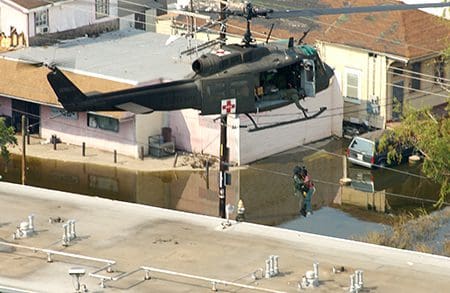 Fifteen years after one of the worst natural disasters to befall the United States, the tremendous National Guard response effort following Hurricane Katrina in 2005 still speaks to the Guard’s enduring value and capabilities.

“By any measure, it was the fastest, most massive military response to any natural disaster that has ever happened,” Lt. Gen. Steven Blum, then the chief of the National Guard Bureau, said at the time. “Our response was the epitome of what the National Guard is and why it is a national treasure.”

Katrina was a category 1 hurricane Aug. 25, 2005 when it hit Florida. The storm entered the Gulf of Mexico and regained strength, becoming a category 5 hurricane by the time it hit Mississippi Aug. 29. It would destroy more than $125 billion of property, and flood more than 80 percent of New Orleans. Katrina resulted in the deaths of two people in Alabama, 14 in Florida, 238 in Mississippi and 1,577 in Louisiana. In New Orleans alone, thousands were stranded in attics or on rooftops, on highway overpasses, and in the Superdome and a convention center downtown. 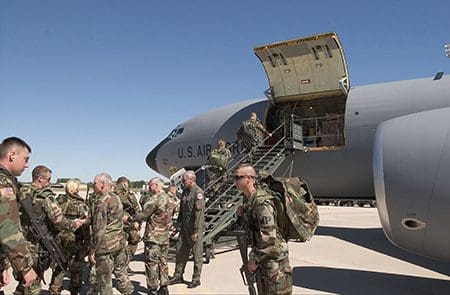 National Guard troops came in from all 50 states, Washington, D.C., the territories of Guam and the U.S. Virgin Islands, and the Commonwealth of Puerto Rico, reaching a peak of 51,039 by Sept. 8, 2005. Wisconsin sent more than 460 Citizen Soldiers and Airmen to support relief efforts in Louisiana. The National Guard Bureau, in its 2010 official report on the Katrina response effort, called it “the largest humanitarian response force in history, with troops deployed over an area the size of Great Britain.”

Blum conducted a teleconference with adjutants general from most of the states and territories Aug. 31, and outlined a plan to provide assistance to the storm-stricken region by deploying Guard members on state active duty orders, through emergency management assistance compacts between states.

“This was simply one of the finest hours for the Wisconsin National Guard,” said Wisconsin’s adjutant general at the time, the late Maj. Gen. Al Wilkening. “Gov. [Jim] Doyle did not hesitate to authorize the deployment of our assets, because ‘it’s the right thing to do.’” 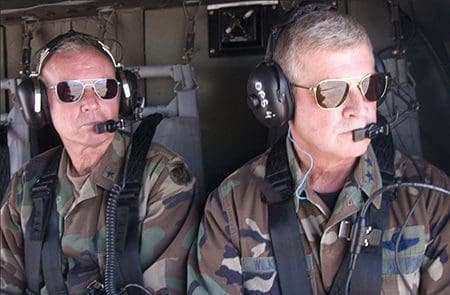 “He emphasized we were used to responding to civil disaster and were a natural for the mission,” Denson said. “It was the right thing to do, and it would take the active Army too long to get authorization.”

Retired Brig. Gen. Dominic Cariello, then a colonel in command of the 57th Field Artillery Brigade, was put in charge of Task Force Wisconsin on Aug. 31. One day later Cariello and his command cell flew to Louisiana to oversee the Wisconsin National Guard troop response effort. They set up shop at Naval Air Station (NAS) New Orleans, located in the suburb Belle Chasse south of the city. The base did not flood, but storm damage left it without power or communications.

In this challenging environment, with the naval air station receiving troops from across the country as well as supplies and equipment, rumors of mass shootings and civil unrest were rampant. Without reliable communications, Cariello was determined not to be swept up in hysteria.

“We’re going to base things on fact, not on folklore and not on the chaos that’s ensuing in all of this,” he recalled saying at the time. “This is where we bring calm to the situation.”

The Wisconsin Air National Guard sent four Airmen and the RC-26 aircraft from its 115th Operations Group to Ellington Field in Houston Sept. 1, where it supported search and rescue missions for Louisiana Emergency Management, the New Orleans Police Department and the Bureau of Alcohol, Tobacco and Firearms. It also took geo-precise photos of damaged levies to help the Army Corps of Engineers plan repairs, and identified the best routes to enter and exit New Orleans. 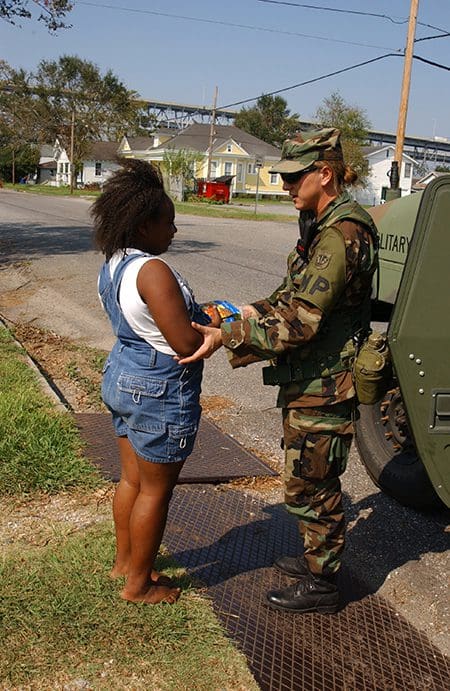 The now-defunct 64th Rear Operations Center sent 33 Soldiers to support Task Force Wisconsin at the Joint Operations Center in Belle Chasse. The 54th Civil Support Team sent six members Sept. 2 to support Task Force Oklahoma in New Orleans. The 1157th Transportation Company convoyed 60 vehicles and 104 passengers to Belle Chasse, while hauling vehicles for other units who flew to the region. While in Louisiana the transportation company transported 197 passengers and approximately 140 tons of cargo and supplies. 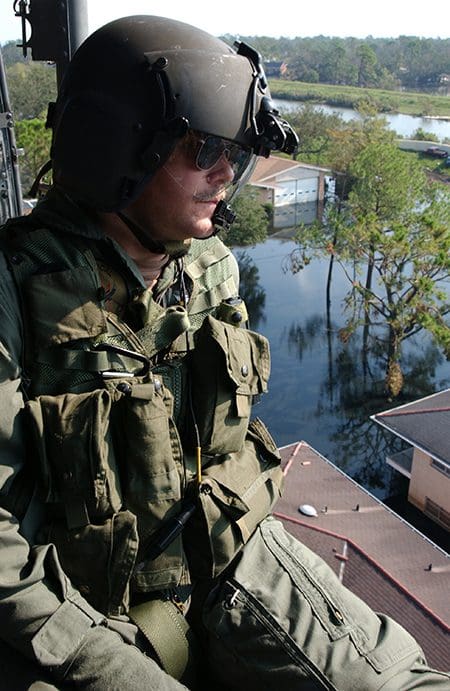 Sgt. 1st Class Wallace Orcutt, an aircraft mechanic with the 147th Aviation, was part of the 2005 Katrina response effort. He recalled seeing as many as 100 rotary-wing aircraft over New Orleans in the wake of the storm — a somewhat daunting environment for pilots to navigate with little air traffic control.

“It just looked like a hornet’s nest,” Orcutt said. “So many aircraft — all services, civilians together for the one cause, was just an impressive sight.” 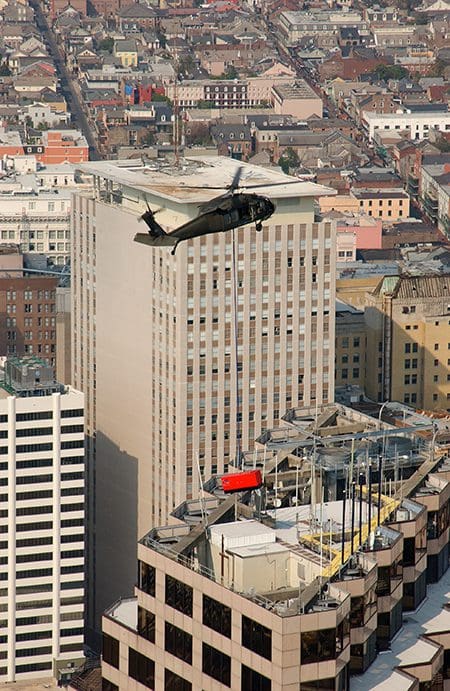 The 147th hauled supplies and equipment, conducted search and rescue missions, ferried Federal Emergency Management Agency personnel to key locations, sling-loaded gravel to rebuild the compromised dikes around New Orleans, and evacuated people from the New Orleans convention center, which had become an island in the flooded city.

The 832nd Medical Company used the hoist on its Huey helicopters to rescue people in floodwaters, and from flooded apartment buildings and rooftops. Other Wisconsin Guard units helped deliver the materials needed to sustain the National Guard response.

Cariello was awarded the Louisiana Cross of Gallantry for his role as Task Force Wisconsin commander, but he asserts the award belongs to the Wisconsin National Guard members who were part of the response effort. 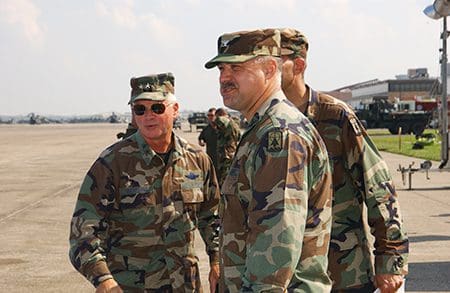 “Wisconsin did everything right,” Cariello said. “From the adjutant general all the way down to the private we had going on this mission, we did everything right. When you think of the magnitude of how quickly we deployed them out of the state of Wisconsin, how the medical team and the Army and Joint staffs came together, it made me proud to be that task force commander knowing that I had that muscle, intelligence and reach-back to the state of Wisconsin. Those are the heroes.”

The Wisconsin National Guard and Wisconsin Emergency Management took the lessons learned from Hurricane Katrina to develop a comprehensive disaster response plan for Wisconsin, and was the first state to submit a copy of such a plan to the National Guard Bureau.

By comparison, more than 47,000 National Guard members were supporting various state-level COVID-19 response efforts in May of this year. In 2020, the Wisconsin National Guard is serving in a different but equally unprecedented way. Nearly 700 Wisconsin National Guard Soldiers and Airmen are currently serving in direct support of Wisconsin’s COVID-19 response effort. That support began in mid-March and peaked at more than 1,400 Soldiers and Airmen mobilized at one point. Another 2,400 mobilized to serve as poll workers amidst concerns over the coronavirus during the April 7 election. Another 160 did the same May 12 during a special election, and nearly 700 more did the same during the August election. The Wisconsin Guard simultaneously mobilized thousands of troops over the course of the summer to support civil authorities in multiple instances of civil unrest since the end of May. Troops responded to requests for assistance in Milwaukee, Madison, Green Bay, Kenosha, and Racine, and troops remain mobilized in support of Kenosha today.

In the same stretch, more hundreds of Wisconsin National Guard Soldiers have returned from overseas deployments to Afghanistan and Ukraine. Hundreds more remain deployed across the Middle East, Afghanistan, and the Horn of Africa.