Year-in-Review: 2020 a year unlike any other in Wisconsin Guard history

MADISON, Wis. — 2020 was the “Year of the Guard” across the nation, as America’s Citizen Soldiers and Airmen answered the call in an unprecedented way in everything from traditional overseas deployments to civil unrest, pandemic response, and supporting the nation’s elections.

Nowhere in America was the “Year of the Guard” more prevalent than in the Badger State, where the state called on the Wisconsin National Guard more than in any other time in the organization’s proud history.

Here’s a look back at the year that was:

The first year of the new decade began with overseas deployments for two Wisconsin Army National Guard units – the 1967th Contracting Team and the 924th Engineer Facilities Detachment. The 1967th deployed to the Horn of Africa where it handled major contracts and acquisitions for U.S. forces operating in the region. The unit returned to Wisconsin just days before Christmas after a successful deployment. The 924th deployed to Kuwait where its engineers essentially functioned as the public works department for the sprawling Camp Arifjan during a time when the coronavirus caused serious complications in supporting the base. 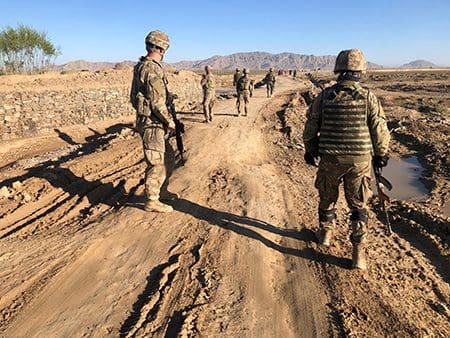 Hundreds of other troops, including the 829th Engineer Company, 1st Battalion, 128th Infantry, and the 32nd “Red Arrow” Infantry Brigade Combat Team Headquarters along with dozens of Airmen from the Wisconsin Air National Guard also began the year deployed after mobilizing in fall 2019. 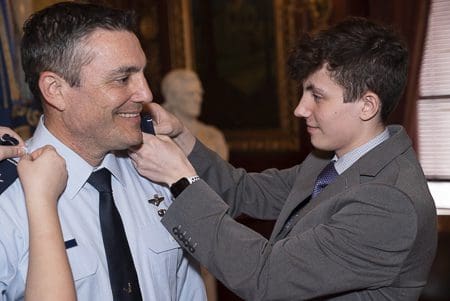 On March 12, Gov. Evers declared a public health emergency in Wisconsin as the COVID-19 pandemic made its way toward the state, and the Guard sprang into action. That same day, approximately 30 Soldiers mobilized to help transport a group of cruise ship passengers from Wisconsin back to their homes after they were exposed to COVID-19.

The Wisconsin Guard never looked back. 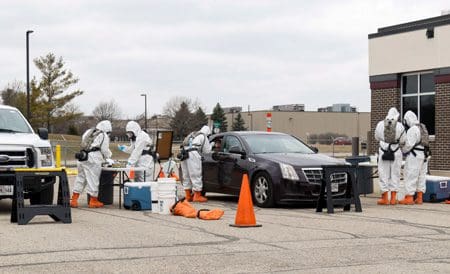 In the ensuing days and weeks, hundreds of additional Citizen Soldiers and Airmen mobilized to State Active Duty as the state braced for the first wave of the coronavirus. Those troops began establishing processes and procedures for mobile drive-thru COVID-19 testing sites and trained on the proper use of personal protective equipment. As March continued, they assisted the state in managing a warehouse handling critical PPE supplies, and a team of medics and medical professionals even deployed to a senior living facility in Grafton, Wisconsin, to assist after a COVID outbreak at the facility resulted in a critical staffing shortage. 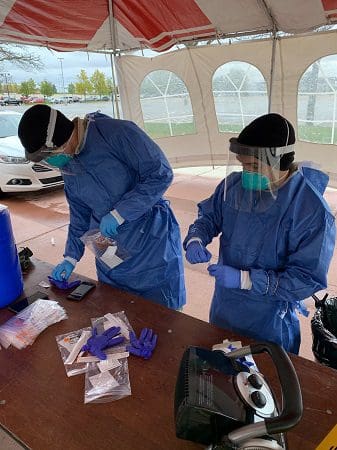 As the state endured the initial shock of the pandemic, state elections officials, emergency management officials, and the Wisconsin National Guard were looking ahead to April and developing a game plan for the April 7 election knowing that finding enough poll workers to volunteer to run a statewide election would be a tall task in the middle of a pandemic.

The state once again called on the Wisconsin National Guard, and its Citizen Soldiers and Airmen delivered in a big way as more than 2,400 troops mobilized in 71 of Wisconsin’s 72 counties to serve as poll workers. The mobilization marked the first time in the nation’s history that the National Guard served in such a role. The Wisconsin Guard would ultimately go on to fulfill the same role during elections in May, August, and again during the presidential election in November. More than 3,700 Wisconsin Guard members mobilized as poll workers throughout the year. 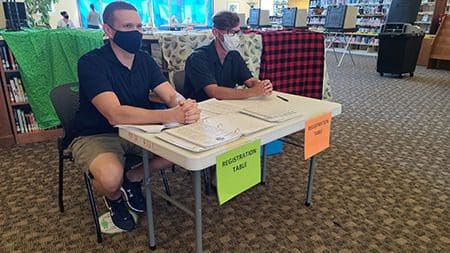 As COVID-19 continued to spread across the state, the Wisconsin Guard only assumed more missions. In a preview of what was to come, a COVID-19 testing team deployed to a senior living facility in Sheboygan, Wisconsin, in early April where it tested all the staff and residents after an outbreak. By month’s end, Guard specimen collection teams were deployed to correctional facilities and other senior living facilities to do the same. They simultaneously deployed teams of medics and administrative personnel to staff voluntary self-isolation facilities in Milwaukee and Madison, Wisconsin, and sent teams of troops to help with the initial setup of an Alternate Care Facility at Wisconsin State Fair Park in West Allis, Wisconsin.

By May, the need for widespread community-based COVID-19 testing was apparent, and Wisconsin once again called on its Citizen Soldiers and Airmen to meet the need. Hundreds of additional troops mobilized to federal duty to run COVID-19 testing sites in communities around the state, run a state call center to inform people of their test results, and continue the response to other COVID-related missions. The Guard’s mobilization peaked at 1,400 troops, representing the largest sustained domestic mobilization in Wisconsin National Guard history. The call center placed more than 565,000 calls before it concluded its operations in December. 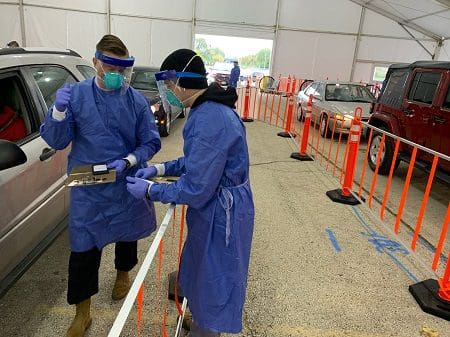 The Guard worked with public health officials in Milwaukee, Madison, and Green Bay to establish long-term testing sites in those communities as well as other testing sites statewide. Eventually testing transitioned to a regional plan, whereby access to testing sites were predictable and repeatable in every corner of Wisconsin. By year’s end, Guard testing sites had administered approximately one million tests in virtually every county.

Even as the pandemic raged, the Guard’s other operations continued. In late April, the first wave – approximately 200 Soldiers – from the 1st Battalion, 128th Infantry began returning home from Afghanistan. The remaining 200 would return in waves over the rest of the spring and summer after a successful deployment serving as “guardian angels” for an Army security force assistance brigade. 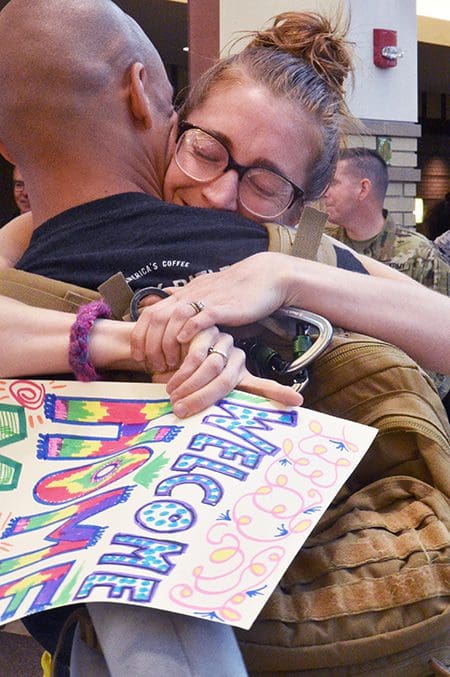 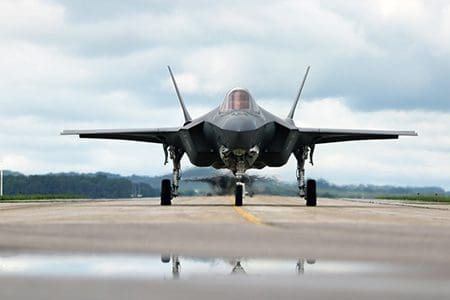 Weeks later, the 115th paid tribute to Wisconsin’s frontline healthcare workers with a stunning statewide F-16 flyover that dazzled spectators and provided a momentary diversion from quarantines and COVID.

As spring turned to summer, a new challenge emerged to test the Wisconsin Guard. After the death of George Floyd in an officer-involved shooting in Minneapolis, nationwide protests and demonstrations began. As some demonstrations turned violent, communities turned to the National Guard to help preserve public safety and set the conditions for individuals to exercise their First Amendment rights to demonstrate peacefully. In Late May and early June, more than 1,200 Wisconsin Guard members mobilized in response to requests for assistance from Milwaukee, Madison, Green Bay, Racine, and Kenosha to help preserve public safety amidst civil unrest.

In late June, more civil unrest broke out around the state capitol in Madison prompting another request for assistance. Some 150 Soldiers assisted.

Then in August, another officer-involved shooting occurred in Kenosha, Wisconsin. The ensuing civil unrest prompted the mobilization of more than 2,000 Guard members to assist in preserving public safety, including more than 700 troops from Michigan, Alabama, and Arizona. 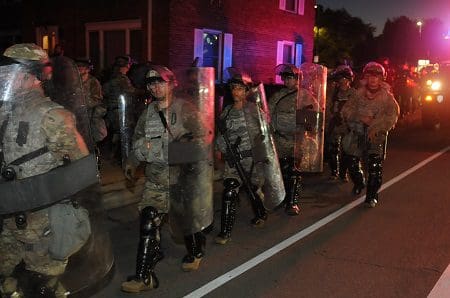 In October, officials in Wauwatosa, Wisconsin requested the assistance of 500 Citizen Soldiers in anticipation of a charging decision for a Wauwatosa police officer in an incident that occurred in February.

Throughout that period, the Soldiers and Airmen continued their annual training periods, deployed and returned from overseas, and continued the COVID response simultaneously in addition to other missions.

In June, the West Bend, Wisconsin-based Detachment 1, G Company, 2nd Battalion, 104th Aviation mobilized for deployment to the Middle East, where the unit continues to perform an aerial medevac mission across the theater. In October, the 176th Cyber Protection Team mobilized to Maryland as well, marking the newly formed unit’s first-ever mobilization.

Meanwhile, the 829th Engineer Company completed its mobilization to Afghanistan and the Middle East, and the 32nd Infantry Brigade Combat Team Headquarters completed its mobilization to Ukraine and returned safely to Wisconsin in late summer and early fall. Since December of 2019, more than 1,200 Wisconsin National Guard troops either deployed or returned from overseas deployments.

Even amidst the pandemic, a major annual exercise went on at Volk Field Combat Readiness Training Center, as nearly 25 units from across the armed forces converged on central Wisconsin’s airspace for one of the nation’s premier air exercises. 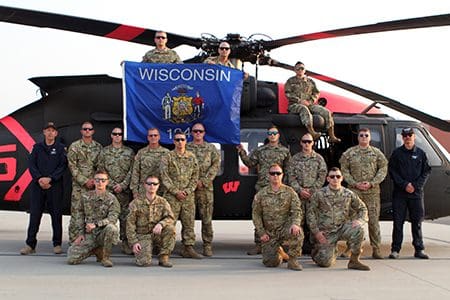 In September, crews and two UH-60 Black Hawk helicopters deployed to California to help the California National Guard battle wildfires raging across the state. The troops spent more than a month dropping water buckets on remote areas in a multi-state effort to keep fires at bay.

In other positive news, the Wisconsin National Guard also received word in 2020 that it had been selected as the new partner for Papua New Guinea as part of the National Guard’s State Partnership Program.

Meanwhile in the Wisconsin Army National Guard, Col. Jeffrey Alston, assumed command of the state’s largest formation – the 32nd “Red Arrow” Infantry Brigade Combat Team and its more than 3,000 Citizen Soldiers. With roots dating back to the 1st and 2nd Wisconsin Volunteer Infantry Regiments that earned distinction in the American Civil War, the Red Arrow represents the state’s most storied military lineage, part of which the Wisconsin National Guard commemorated in its “654” series, which chronicled the Red Arrow’s service in World War II, where it spent 654 days in combat in New Guinea, the Philippines, and Japan – more than any other division in the war. 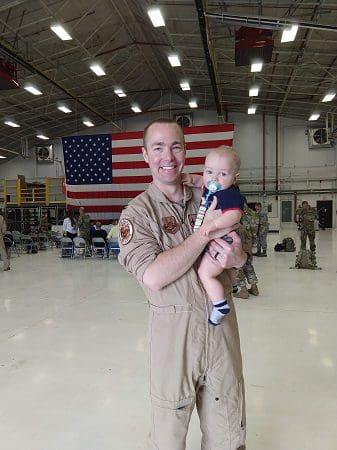 The year ended tragically as Capt. Durwood “Hawk” Jones, a 37-year-old father and husband assigned to the 115th Fighter Wing, lost his life when his F-16 crashed in Michigan’s Upper Peninsula during a training mission Dec. 8. The crash remains under investigation.

A glimmer of hope emerged at the end of the year though, as the state and nation began administering the first COVID-19 vaccines to frontline healthcare workers. The Wisconsin Guard was once again there assisting with vaccine inventory management to assist the state with the efficient distribution of the vaccine.

The past year was a momentous one – unlike any other in Wisconsin Guard history, which dates back to 1837. But as the “Year of the Guard,” the Wisconsin National Guard looks forward to a brighter 2021 and continued service to Wisconsin and the nation.