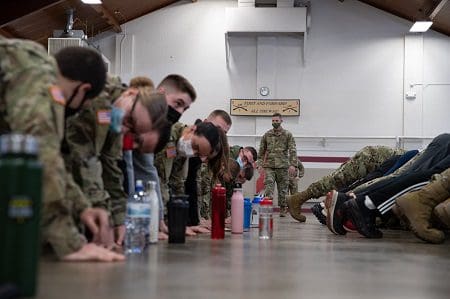 Wisconsin Army National Guard recruiters have turned to innovative and traditional measures to work toward recruiting goals over the past year despite challenges brought on by COVID-19.

“We have about 1,000 [Recruit Sustainment Program] Soldiers within Recruiting and Retention, so our first initial issue that we dealt with is maintaining the training pipeline, preparing new Soldiers to get to basic and go get out the door for training,” said Lt. Col. Jeremy Duffy, commander of the Recruiting and Retention Battalion. “Our first concern was how do we accomplish that? How do we do that safely?”

The Recruit Sustainment Program (RSP) is similar to a traditional National Guard drill weekend and prepares new recruits for what they will learn and do in basic combat training. Newly recruited Soldiers train with an RSP unit before attending basic training and getting assigned to their future unit.

Training for new recruits in the Wisconsin Army National Guard was initially cancelled for two months last year in the early stages of COVID. Training has resumed since, and current recruits are completing one day of decentralized training and one virtual training day each month.

“So that’s kind of the way we’ve been bridging the gap, but we intend that we’re going to go back to full training, back to traditional RSP training two days a month starting probably in April we’re hoping,” Duffy said. 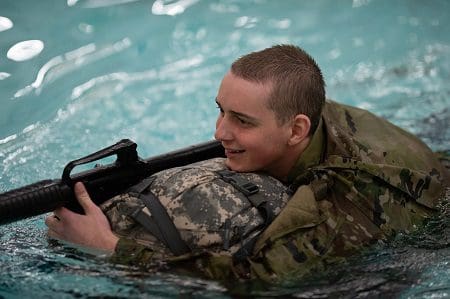 COVID-19 didn’t initially impact the recruiting mission in Wisconsin last year. Recruiters started the last fiscal year really strong and were able to work leads they already had in place as the pandemic began to affect the state, Duffy said. This led to the Wisconsin Army National Guard beating its recruiting goals last year, as it assessed 944 new recruits, which exceeded the five-year moving average of 932 recruits. The new recruiting year began in October, coinciding with the federal fiscal year.

Duffy said the battalion has really been feeling the effects of COVID since the new recruiting year began and recruiters haven’t had access to traditional means of interaction.

“Our recruiters don’t have access to traditional avenues of recruiting, and a lot of that is face-to-face in person stuff with either high school students or college students, or technical colleges. It’s been very difficult from that standpoint,” Duffy said.

With the majority of high schools and colleges turning to virtual or hybrid models this year and tightening restrictions, it has been challenging for recruiters to get face time with students.

“We do those kinds of things like gym visits,” said Staff Sgt. Nicholas Manor, a recruiter for the University of Wisconsin-River Falls and the University of Wisconsin-Stout who used to also recruit in high schools. “We bring stuff in. I used to teach history classes and stuff for 10th graders. So that visual that we got, that face-to-face time was key and that’s why we’ve always been successful.” 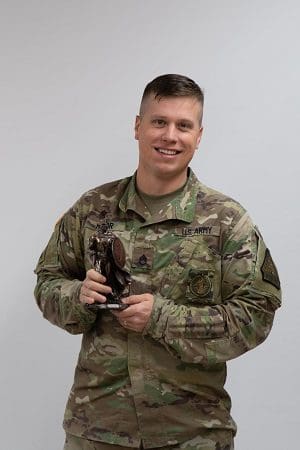 Manor was awarded the coveted Chief’s 54 award for being the top recruiter in the state of Wisconsin last year, bringing 28 new recruits into the organization. He said this year has been drastically different. The lack of face-to-face interaction and the requirement to wear a mask has made it hard to interact and connect with people. This has led to trying different methods to reach people.

“I think people are adapting,” Manor said. “I have the younger kids show me what they’re doing to see if I can do it. Just simple stuff, but definitely branding yourself is always huge.”

Some recruiters have been hosting armory nights in the hopes that their current recruits will bring in guests to learn more about the National Guard. Many have relied on referrals. Manor said he has also been using old school methods of recruiting – sending out mass emails and calling people in order to build connections.

“You’ve got to try anything right now and whatever sticks we share with our team,” Manor said.

Sgt. 1st Class Rocco Sylvester, a recruiter in Baraboo and Sauk County, has also embraced the basics of recruiting this year, making phone calls, and sending text messages and emails.

There has also been quite a bit of collaboration between recruiters.

“What I have been noticing and like is our peers reaching out to other states to see what struggles and new ways they have been going through,” Sylvester said. “In the end, we are all in this together and want to see everyone succeed.” 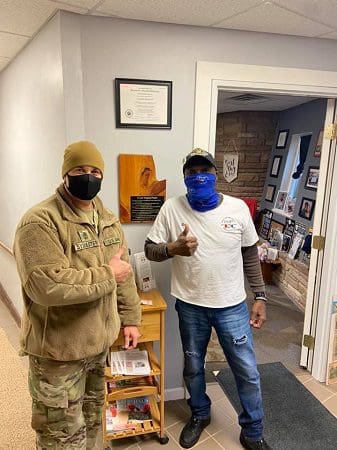 Sgt. 1st Class Rocco Sylvester, a recruiter in Baraboo and Sauk County, poses for a photo with the Rev. Bill Harris after Sylvester gave him donut holes as a gesture recognizing his contributions to his community. Wisconsin National Guard photo

The Wisconsin National Guard has been very prominent in communities throughout the state this past year. From supporting the state’s COVID-19 response, to supporting state elections, to preserving public safety amid civil unrest, Guard troops have been highly visible and served with honor and professionalism. Others have mobilized to battle wildfires in California. These high profile missions have helped in some aspects to showcase what the Wisconsin National Guard is capable of, and helped ensure that potential recruits are familiar with the National Guard and consider it as an option.

“This is what these brave men and women signed up for,” Sylvester said. “They are able to do their part of serving and protecting their communities. I’ve had numerous interested applicants come in and want to be part what’s been going on in their communities.”

Hundreds of Wisconsin National Guard have simultaneously mobilized for overseas deployments to places like Afghanistan, Ukraine, the Middle East, and the Horn of Africa even as the Guard has been engaged in an historic effort here in Wisconsin.

Duffy is hoping this past year’s missions will highlight the impacts of the Wisconsin National Guard throughout the state. With Guard troops assisting in a number of capacities in communities all across Wisconsin, many more Wisconsinites are suddenly familiar with the organization and its core missions of serving their own local communities, the state, and the nation.

“Most people don’t join the Guard because they want to go to Afghanistan,” Duffy said. “They want to help their community and they want to get some benefits and make a little bit of money and do something that’s bigger than themselves.”

The Guard can offer an attractive option for people who want to serve, but also retain their ability to pursue college or a civilian career, and serve close to home while earning healthcare benefits, free college tuition, and more.

Duffy added that recruiters are also preparing themselves for when schools are open and more in-person events resume. Many recruiters have received both doses of the COVID-19 vaccine.

“We’re fully on prepping ourselves so that once things start to open up we’re fully prepared to try and execute those more traditional channels of recruiting,” Duffy said.

Duffy remains optimistic that recruiters will continue to persevere as they navigate this new recruiting environment with various COVID-19-related restrictions. As the mission continues, collaboration and adaptation have been vital.

“It’s very inspiring to watch people adapt and figure out how we’re going to do this,” Duffy said.