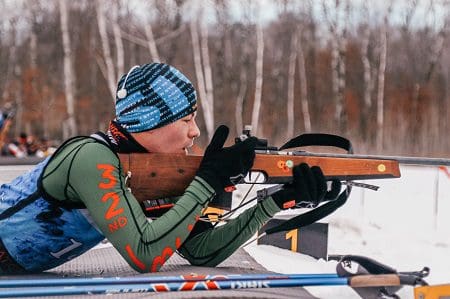 The competition represents a test of physical fitness, mental resilience, marksmanship and technical skills, all of which are critical attributes for any Soldier or Airmen charged with the National Guard’s critical mission of serving in the primary combat reserve of the Army and Air Force or as the state’s first military responder in times of emergency.

“This year, we saw tremendous development, primarily because all but one of our athletes have never attempted a biathlon before,” said Maj. Bill Barthen, a Soldier with the state’s maintenance inspection team, and a coach and biathlete with the Wisconsin National Guard biathlon team.

Nine Wisconsin National Guard biathletes attended a training workshop in January at Camp Ripley that took place in lieu of a traditional regional competition. Of those, five returned to Camp Ripley for the national competition in late February, and one more new member, Pfc. Andrew Ross from Company F, 132nd Brigade Support Battalion, was recruited to the team.

“When I met him in Iola in February, he was an outstanding skier, but had never applied bouts of shooting to his ski racing,” Barthen said. “His first time firing the specialized rifle was during training within 24 hours of his first biathlon race. He quickly adapted to the procedures of transitioning from skiing to the range and back to skiing without issue.”

Ross has now completed four biathlon races and is motivated to train and make large improvements as a member of next year’s team. 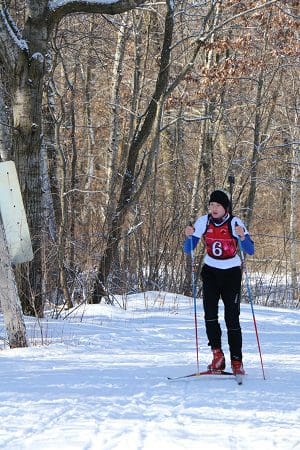 According to Barthen, competing on the Guard’s biathlon team creates Soldiers that are more fit than other service members. Barthen has been involved with the biathlon team for three years, competing in 2018, and then returning in 2020 and 2021.

“I love the challenge of exercising as intensely as possible to be the fastest on the course, then calm down enough and get control of breathing for a skilled event like shooting,” Barthen said. “It is absolutely the pinnacle of physical and mental readiness for a Soldier or Airman.” 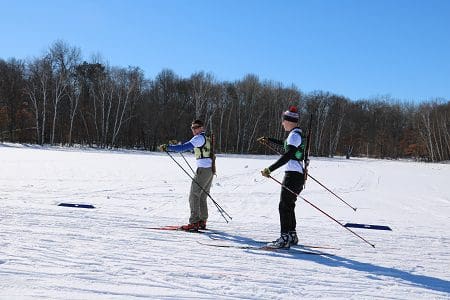 Koball has been involved with the Wisconsin National Guard biathlon team for about two months. He learned about the team through his recruiter and felt it would be a good opportunity to stay active.

“I love to represent my state and love to be able to do something that a lot of people never get the chance to ever do while serving in the National Guard,” Koball said. “I love that it’s going to keep me fresh and growing mentally and physically.”

Koball enjoys challenging his teammates, keeping both them and himself motivated. Training for the biathlon team is almost exclusively done individually, so it’s important for the teammates to keep each other motivated.

“We are so light-hearted, but super competitive at times,” Koball said. “I always want to do great for my team, but I also feel if I make a big mistake we will just talk about it, fix it, and move on.”

Breault, currently the sole female member of the Wisconsin National Guard biathlon team, has strived for faster times and further distances as she skied alongside her male counterparts. She agreed that the camaraderie and open communication helps keep everyone motivated. 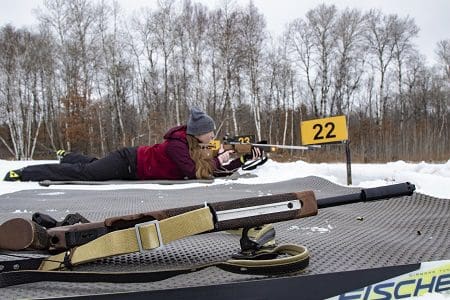 Sgt. Taylor Breault, a recruiter with the Wisconsin National Guard takes part in a biathlon training camp and qualification, Jan. 16, 2021 at Camp Ripley, Minn. This year in lieu of a regional match, these times will be used for placement for the upcoming Chief of the National Guard Bureau Championships held at the end of February on Camp Ripley. (Minnesota National Guard Photo by Sgt. Mahsima Alkamooneh)

“We are a very open group of people,” Breault said. “No matter what your skill level is, we will welcome you into the group as we want to rebuild the team up and hopefully get a much bigger team going for next year.”

Breault took the plunge to join the team after Daley told her about the opportunity and the fun he had at the national competition last year. She said she used to play hockey for her hometown, Cumberland, Wisconsin, and missed being a part of a sports team.

“For the past six years that I have been in the Guard I never even knew about all of the sport teams we truly have and look forward to sharing this information through my own experience with the biathlon to others in the Guard,” Breault said.

The Wisconsin National Guard biathlon team hopes that next year the team will continue to grow and expand, and there will be enough Service Members interested to develop an entire women’s team. Barthen also hopes to have a competition in December to select the team’s top athletes and create an order of merit list.

“That will increase our competitiveness and build a program of solid leaders who can contribute to success across the entire Wisconsin National Guard,” Barthen said.

For this year, team members are proud of what they have accomplished and how they have grown.

“I am very proud of our athletes. I see so much potential, not just in each one as a service member and biathlete, but also for the impact they’ll have on their communities,” Barthen said.