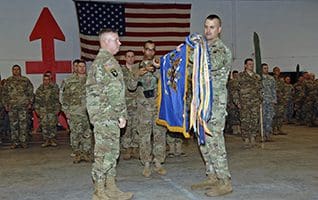 During a formal patching ceremony nearly 100 years later, a reorganized 126th Infantry is once again joining the “Red Arrow,” now the 32nd Brigade.

“This day marks a significant step forward in the Iron Battalion’s history, and in our collective effort to be the very best organization in Michigan and the 32nd Infantry Brigade Combat Team,” said Lt. Col. Ravindra Wagh, commander of the 3rd Battalion, 126th Infantry Regiment. “Embrace our lineage, and demand that every Soldier that follows you does the same.” 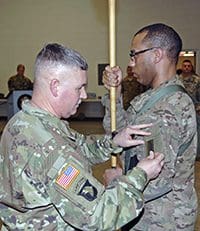 “We’re really excited about that,” said Col. Michael George, 32nd Infantry Brigade Combat Team commander. “That’s relevant to the future warfight, and as we retain the 105th Cav Squadron, that really provides an optimal balance of maneuver and reconnaissance forces.

“As far as the historical significance to the Red Arrow tradition, to reconnect our roots with our Michigan Soldiers and the state of Michigan is just incredible,” George continued. “Especially to have it done 100 years after the formation of the 32nd Division.

“The timing is just remarkable.”

George said some wrinkles still need working out regarding how to include the 126th Infantry in brigade training plans.

“We’re getting used to going north around Lake Michigan,” he said. “We’re all very confident that we will develop a working relationship and a reasonable schedule of training either in Michigan or Wisconsin, or elsewhere.”

A few days after being ordered to federal service on July 15, 1917, General Order 95 combined Solders from the Wisconsin and Michigan National Guard to form the 32nd Division. Michigan supplied the 63rd Infantry Brigade, consisting of the 125th and 126th Infantry regiments.

The 126th served with distinction in World War I and World War II. The 32nd Division became a wholly Wisconsin division after World War II until it was reorganized as an infantry brigade in 1967. 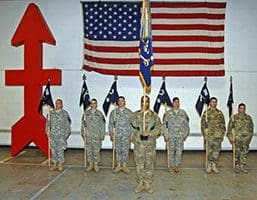 The 126th was among the first American troops to set foot on German soil during World War I on May 18, 1918. Less than a week later, Pvt. Joseph W. Guyton of Company I, 126th Infantry, became the 32nd Division’s first casualty of war when he was killed by machine gun fire. The next day, the commander of the French 9th Infantry Division decorated Guyton with the Croix de Guerre (the Cross of War) with silver star.

With just over a month remaining in the first World War, the 126th Infantry attacked the Kriemhilde Stellung — at that time the strongest German position in the Meuse-Argonne section of the Hindenburg Line.

Called back to federal service in 1940 for World War II, the 126th Infantry Regiment trained with the rest of the 32nd Division for a European conflict, only to find themselves heading to Australia to take part in combat in the South Pacific. It was the first U.S. military unit sent to Port Moresby, New Guinea, where in September 1942 it built the American base camp.

The 126th’s second battalion took part in one of the most demanding marches in American military history in October 1942 when the battalion crossed the Owen Stanley mountain range. After completing the trek of more than 130 miles, the battalion was to engage Japanese forces near the coast. But the march took 42 days, and the Soldiers were ill-supplied for a seldom-traveled trail the locals believed to be haunted. Heavy rain, constant exposure to the elements and insects, rancid rations and illness weakened the battalion, which earned the nickname “Ghost Battalion” due as much to their ghost-like appearance as the spectral atmosphere crossing the mountain range. The anticipated battle with the Japanese was over before they completed their march.

Following World War II, the 126th Infantry endured in the Michigan Army National Guard until 1999, when it became an armor battalion. In 2006 the 126th transformed into a cavalry squadron. The unit deployed in whole and in part during the Global War on Terror, stateside and overseas.

The 126th’s lineage dates back to the Civil War.