Piercing the goal line: Badgers, Wolverines united 100 years ago on the football field 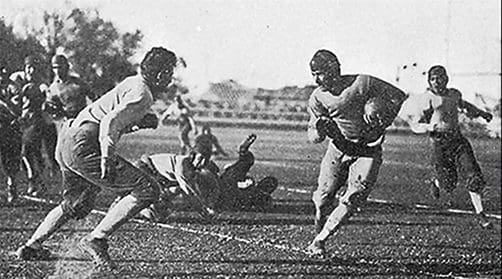 A member the 32nd Division football team runs the ball during one of its games between October and December, 1917. Image from “Camp MacArthur: Fields of Valor”

The intense football rivalry between Wisconsin and Illinois has existed long before the Green Bay Packers and the Chicago Bears line up Sunday at Chicago’s Soldier Field. In the fall of 1917, some of Wisconsin’s best National Guard players joined with those from Michigan to defeat their Illinois brethren, strengthen the bonds of Army brotherhood and build an early reputation as a force to be reckoned with — as well as emerge arguably as the nation’s best Army football team. 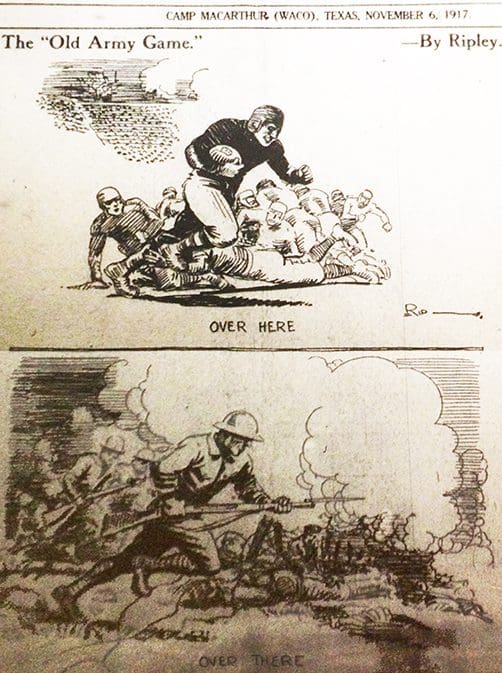 Army units across the nation preparing for war in the fall of 1917 rallied around their divisional football teams. The teamwork and toughness required by the sport was seen by the Army as desirable traits for the battlefields of France. Image from Nov. 6, 1917 Camp MacArthur Bugle

Indeed, beyond the accolades earned by the 32nd Division football team, the division’s commanding officer credited the team’s success for uniting the many National Guard units from Wisconsin and Michigan — each with their own identity — into a unified National Guard division ready to deploy to the battlefields in France as an integral part of the American Expeditionary Force.

Just as it does today, the National Guard had an important dual-mission to serve as the nation’s first military responder in times of emergency and as the Army’s primary combat reserve, and organized sports became a very important part of preparing Soldiers for World War I, and troops participated in a variety of activities. Every 32nd Division Soldier training at Camp MacArthur near Waco, Texas, participated in organized sports each Wednesday and Saturday afternoon in order to promote fitness and the unit camaraderie built through spirited competition. 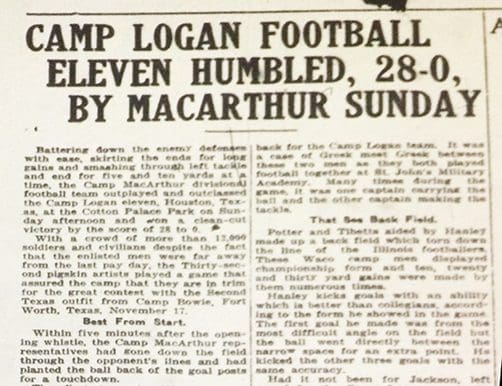 Although companies and regiments fielded teams in almost every sport, troops most desired a spot on the unit football team, and 27,000 Soldiers played on 750 regimental football teams spread across the nation’s Army training camps. The best of these players earned places on their training camp’s divisional team — these teams spent the fall of 1917 playing each other and provided a point of emerging unit pride within the Army’s thirty-two new divisions.

The initial call for tryouts for Camp MacArthur’s 32nd Divisional team attracted 150 men, which was soon whittled down to 45. Most of these players previously had played for Marquette, Michigan and Wisconsin or a dozen other university programs. These players conducted military training throughout the day and then reported to daily football practice at 4:30 p.m. 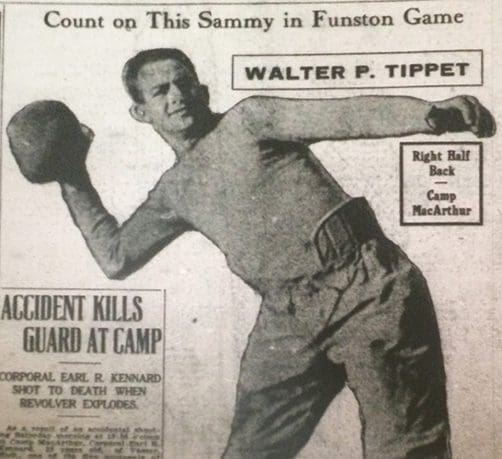 Walter Tippet of Stevens Point, Wis., was a star halfback at Appleton’s Lawrence College and was one of the top players on Camp MacArthur’s 32nd Divisional football team, comprised of men from the Wisconsin and Michigan National Guard. Image from Dec. 4, 1917 Camp MacArthur Bugle

Coaching the team was Maj. Clarence J. Kenney of the 121st Field Artillery. Kenney was a star halfback while attending medical school at St. Louis University, and later coached at Creighton and Marquette. The halfback duo of Con Hanley of Milwaukee and Walter Tippet of Stevens Point led the team’s run-oriented offense. Conley had played on Marquette’s team while Tippet was an all-star at Appleton’s Lawrence College.

After the 32nd Divisional Team won two warm-up games within the division by a combined score of 57-0, it faced its first real test on Nov. 4 against Camp Logan’s 33rd Division team consisting of troops from the Illinois National Guard. The game was one of the feature events of Waco’s annual Cotton Palace Exposition, which was a two-week festival very similar to a state fair. Twelve thousand watched the men of Wisconsin and Michigan triumph over Illinois by a score of 18-0. 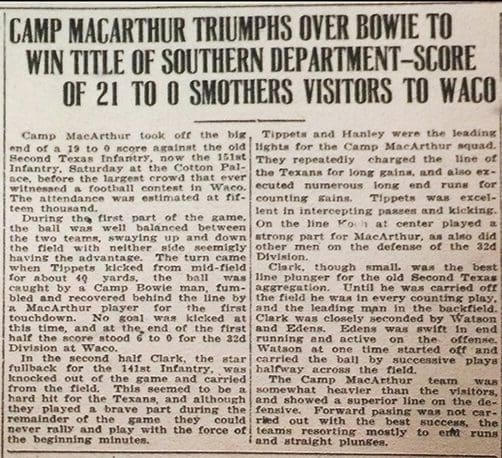 The next game on Nov. 11 was a battle with the 90th Division team from San Antonio’s Camp Travis. Filled with many collegiate all-stars, many considered the combined Texas and Oklahoma contingent as one of the Army’s top teams. More than 6,000 watched the Camp MacArthur men win 9-7 in a hard-fought defensive struggle at Waco’s Cotton Palace Field, hailed as “the best played game ever staged in Texas.”

On the last day of the Cotton Palace Exposition, Nov. 18, the 32nd Division played Fort Worth’s Camp Bowie team, made up of troops from the Texas National Guard. More than 14,000 watched the 32nd blank the Texas men 21-0 and win the Army’s southern camp championship, as well as a handsome trophy awarded by Waco’s Dr. Pepper Company. 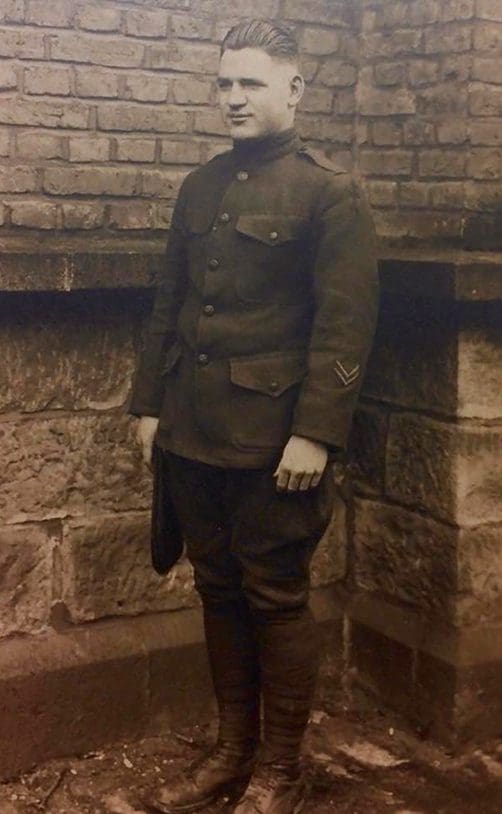 Con Hanley of Milwaukee was a star halfback at Marquette University and was one of the top players on Camp MacArthur’s 32nd Divisional football team, comprised of men from the Wisconsin and Michigan National Guard. Wisconsin Veterans Museum photo

Brig. Gen. William Haan, the division’s acting commander, praised the team after the victory and spoke of the important work it was doing in building the division.

“The work you have done for the division is worthy of recognition,” Haan said. “The games you have played and the spirit you have shown have brought the division together in a closer bond.”

With the south championship under its belt, the division team set its sights beyond Texas. The team challenged numerous Army camps and colleges across the nation. Some proposed games, such as a Christmas Day tilt in New Orleans with collegiate national champions Georgia Tech, did not make the schedule. 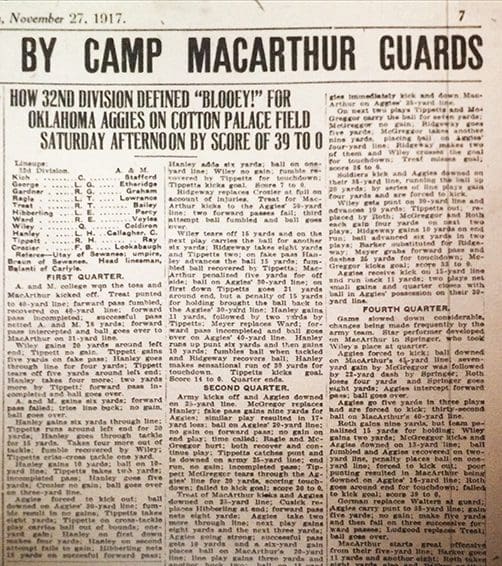 The first to take the challenge were the Aggies of Oklahoma A&M (present-day Oklahoma State University) who traveled to Waco for a Thanksgiving Day contest. Unable to stop halfbacks Conley and Tippet from making runs of 10 and 20 yards, the Aggies boarded the return train to Stillwater with stinging memories of a 39-0 defeat.

In early December, the Camp MacArthur gridders ventured to Michigan and suffered its first loss to the University of Detroit, one of the state’s top teams. It rebounded from that 37-7 defeat with a 20-0 victory over Michigan Agricultural College (present-day Michigan State). Attended by thousands of local residents, the proceeds of each game went to the Christmas fund for Michigan National Guard troops stationed at Camp MacArthur. 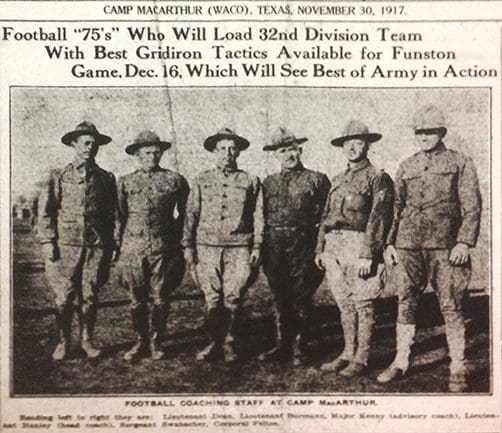 At a victory banquet in Lansing, Michigan, Haan described the football team’s path to success as a metaphor for his training plan for the 32nd Division.

“I believe in thoroughly surrounding the men in fundamentals as the best Soldiers seek to obtain perfection,” Haan said. “The divisions that have paid strict attention to fundamentals are the ones making the best progress.”

The team returned to Texas and on Dec. 16 faced the 89th Division team from Camp Funston, Kansas. A match between two of the Army’s finest teams, the winner would become the Army champion of the West and arguably the Army’s national champion. A hard-fought contest at Waco’s Cotton Palace field, 15,000 troops witnessed a 12-6 victory by the MacArthur team. 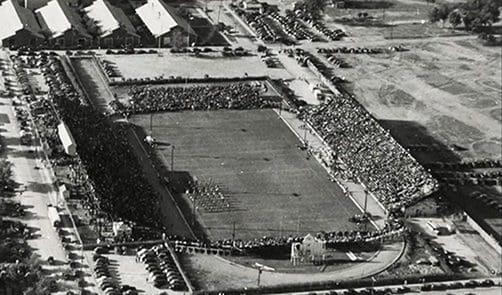 Waco’s Cotton Palace Field was the site of most of the football games played by the 32nd Division football team between October and December, 1917. Image from “Camp MacArthur: Fields of Valor”

The victory was the division’s last. It would leave Camp MacArthur in early January and all attention turned towards joining the American Expeditionary Force in France. Victorious against every military team it faced, Camp MacArthur’s football team united the troops from Wisconsin and Michigan into a division that would pierce every enemy line it faced.

“The football squad has done more to create a division feeling than anything that has been undertaken since the camp was opened,” Haan said. “I had thought only a baptism of German fire could so cement the members of the division as one.”