“The ten military bands for Camp MacArthur which are composed of 400 musicians will be combined and play a varied concert under the leadership of Band Master Steinmetz,” proclaimed a recitation of a Waco, Texas, newspaper article in the Dec. 20, 1917 edition of the Marshfield News. 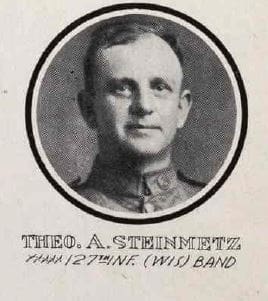 Leading this gigantic band was Marshfield’s Theodore Steinmetz, who joined in 1898 the 2nd Regiment Band of the Wisconsin National Guard. Except for a one-year hiatus as a member of the U.S. Military Academy Band at West Point, Steinmetz for twenty years was the Wisconsin National Guard’s premier musician. Steinmetz led the 2nd Wisconsin Regiment Band while it deployed in 1916 and early 1917 to Camp Wilson near San Antonio during Mexican Border Service. While there, the band earned an excellent local reputation and played frequently at events around the city. As the 2nd Regiment band prepared for World War I it lost all but six of its members due to a War Department directive discharging all of its married personnel. Wisconsin Adjutant General Orlando Holway understood the positive effect of bands on troop morale so he ordered Steinmetz to “Get together the best band in the United States Army. You will be allowed recruiting expenses.” Steinmetz’s musical reputation eased his recruiting burden – talented musicians from eighteen Wisconsin cities flocked to play with the 2nd Regiment. His brothers Eugene, Fritz and Emil also joined. The Army renamed the outfit the 127th Infantry Regiment Band upon its arrival at Camp MacArthur. 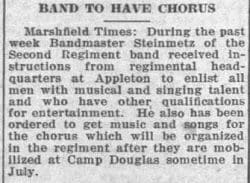 The Dec. 21, 1917 issue of the Stevens Point Journal reported on Steinmetz’s 400-piece band
The 127th Band played frequent concerts in Waco for the entertainment of both the troops of Camp MacArthur as well as the local population. The forty-piece ensemble also fielded an orchestra and a vocal quartet. On Dec. 16, 1917, the 32nd Division football team faced the 89th Division team from Camp Funston, Kansas, for the Army championship of the West. Played at Waco’s Cotton Palace Field, the game pitted two of the Army’s finest teams with the winner emerging as arguably the Army’s national champion. Brig. Gen. William Haan, commanding general of the 32nd Division, emphasized unity as he molded the unit into an effective fighting force – this championship game provided a valuable opportunity in that quest. In preparation for the big game, he appointed Steinmetz as division band master and tasked him to fire up the troops attending the contest. For the pregame concert, Steinmetz consolidated the division’s ten bands into one 400-piece group – thought to be the largest military band of the era. He also wrote the “32nd Division March” to rally the men of Michigan and Wisconsin. 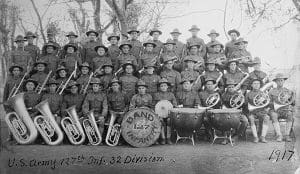 127th Infantry Regiment Band at Camp MacArthur (Wisconsin Veterans Museum)
The song blended the melodies of “On Wisconsin” and “Michigan, My Michigan” as a sign of unity between the Guardsmen from the two states. Also incorporated into the song were aspects of “God Save the King” and “La Marseilles” as a nod to two of America’s primary war allies. And finally, the final line was set to Theodore Metz’s “A Hot Time in the Old Town Tonight,” which was a popular Dixieland tune with both military units and university sports teams. The original march featured two sets of lyrics – one for the division as a whole and the second for rallying the football team. Marshfield’s Melody Music Company immediately published Steinmetz’s song and local bands started to play it throughout Wisconsin and Michigan in support of their troops deployed with the 32nd Division.

Steinmetz rewrote the song’s lyrics after the 32nd Division earned its Red Arrow nickname on the battlefields of France, but how it earned that nickname is a story for a later time.