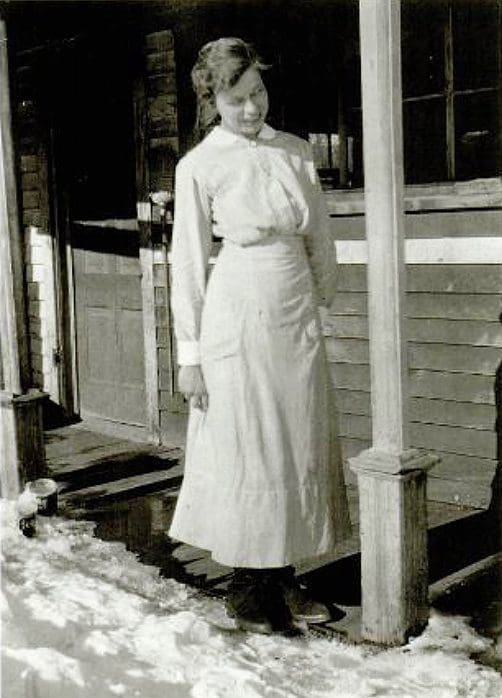 Two women serving as Army nurses in World War I were part of a long journey resulting in the opportunity for women today to serve in every duty position in the Wisconsin National Guard.

When the United States declared war on Germany on April 6, 1917, the Army Nurse Corps consisted of 403 women. Although part of the Army, nurses at this time held no rank and were addressed as “Miss” or “Nurse.” To provide proper medical care for the two million Soldiers expected to serve overseas, the Army recruited thousands of nurses from across the nation. Robar and Leckrone, recent graduates from Chicago’s Northwestern University, were two of the 10,000 nurses who served in France with the American Expeditionary Force. 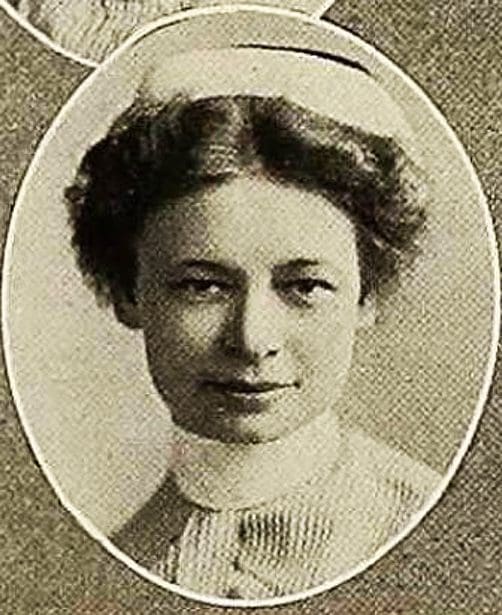 The two roommates volunteered for the Army Nurse Corps in November 1917 and sailed a month later for France with American Red Cross Military Hospital No. 1, which set up in Neufchateau as Base Hospital No. 66. The hospital was modern for the era and living conditions comfortable.

Army doctrine in 1918 stationed female nurses at base hospitals and other facilities well away from the front lines. They were not assigned to mobile field hospitals that followed Army divisions from place to place and were frequently located within enemy artillery range. Medical necessity soon put women in those field hospitals. 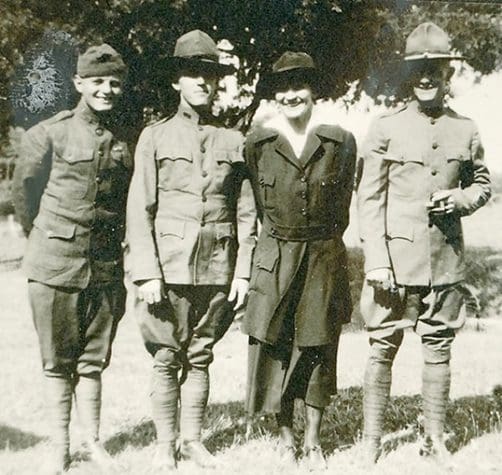 “Despite every intention to keep hospitals and women out of harm’s way, the circumstances of war and the practice of medicine brought nurses under the maelstrom of World War I artillery bombardments,” wrote Lt. Col. Richard M. Prior and William S. Marble in a 2008 journal article in Military Medicine.

It soon became apparent that treating casualties as close to the front as possible increased chances of survival. With nurses vital to many medical tasks, the Army created special medical teams with nurses from base hospitals and assigned them to forward treatment stations on an as-needed basis. One type of team was a specially trained shock team of female nurses and male corpsmen that treated casualties experiencing severe blood loss. Many Army nurses coveted assignment on these forward-deployed teams, and there were more volunteers than duty positions.

Robar and Leckrone volunteered for Shock Team No. 134, which arrived July 28, 1918 at the 32nd Division’s 127th Field Hospital near Chateau-Thierry. The 32nd Division, consisting of troops from the Wisconsin and Michigan National Guard, had moved to the front line in preparation for a key attack during the Aisne-Marne Offensive. The 127th Field Hospital set up a 500-bed facility in a school building that suffered from heavy damage during a previous battle. It was well inside enemy artillery range. 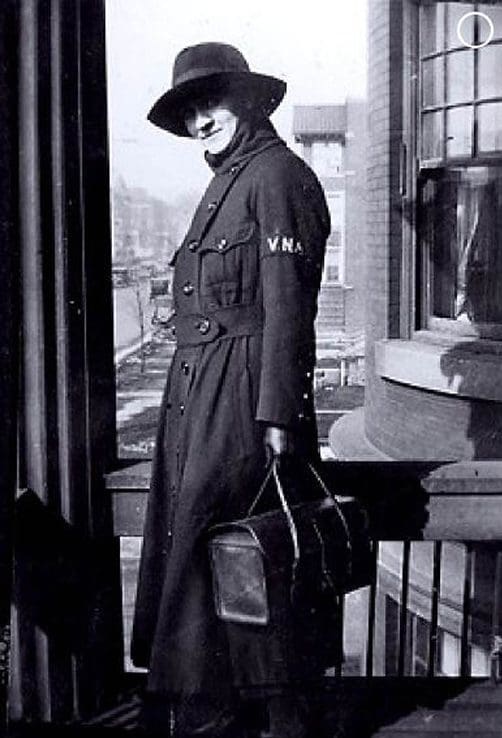 The next day, Robar and Leckrone went to work as a steady stream of 32nd Division casualties arrived at the 127th. During that day, the hospital received artillery fire and the two nurses remained at their stations treating the wounded. They would remain with the 127th for the next 10 days, as the unit followed the 32nd Division during an attack that advanced 11 miles and seized the city of Fismes on the Vesle River.

Shortly after the battle, Maj. J.W. Vaughn, a 32nd Division medical officer, commended all six members of Shock Team 134 and individually lauded the actions of Robar and Leckrone at Chateau-Thierry. After the war, the two nurses received Citation Stars for “attending to the wounded during artillery bombardment.”

Congress on July 9, 1918 authorized the Citation Star for gallantry under enemy fire. The award consisted of a small silver star that the recipient affixed to their World War I Victory Medal. Over the course of the war, 4,800 service members earned the award — of which 381 were part of the Army Medical Corps. In 1932, the Secretary of War authorized the full-sized Silver Star Medal in place of the Citation Star, and World War I recipients could request an exchange for the new medal. 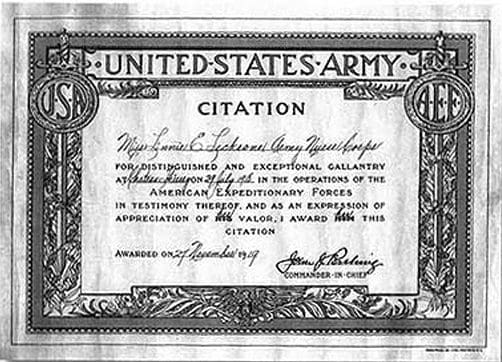 Unfortunately, many Citation Star recipients remained unaware that they had earned the award, much less knew that they were eligible for the Silver Star Medal. Much of the award paperwork was done after many service members had already returned home. In the case of Robar and Leckrone, they served with the 32nd Division for only 10 days, and a division officer most likely submitted the award after the pair had returned to their unit. Historical accounts and Leckrone’s family suggest that the two may not have known of the award’s significance. 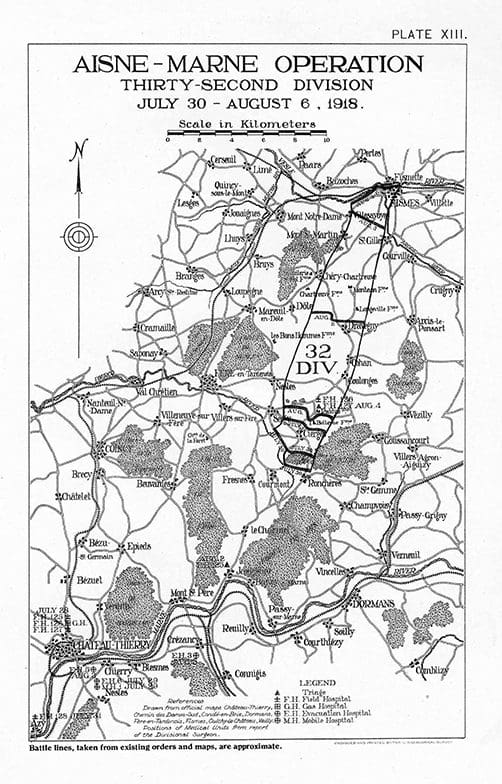 The service of all nurses in World War I expanded the role of women in the U.S. military. In 1920, the Army authorized officer’s rank for nurses, and doctrine later changed to assign female nurses to field hospitals. Gradually, more duty positions throughout the military opened to women, culminating in January 2016 when the Secretary of Defense announced that no military occupations were subject to gender restrictions.

Robar and Leckrone returned from France in 1919 and discharged from the Army. Robar made a career of nursing and worked at veterans’ hospitals in South Dakota, Massachusetts and Colorado. She remained unmarried and died in 1986. Leckrone settled in Colorado and worked at a tuberculosis hospital until she married Ralph Bolles in 1922. The couple raised four children, and she died in 1989. 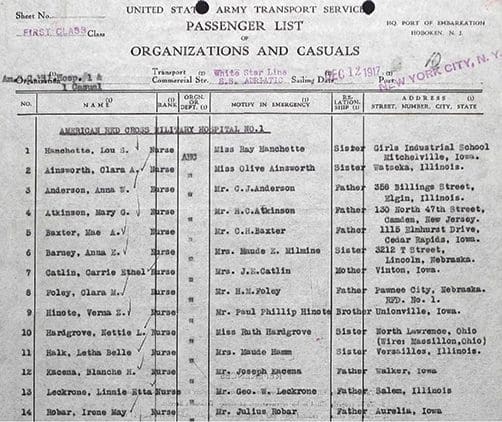 The U.S. Army presented Leckrone’s Silver Star to her family in 2007 at an event that recognized the service of the three World War I nurses who earned the medal. Unfortunately, none of Robar’s relatives were located for the ceremony. The third recipient was Chief Nurse Jane Rignel, who earned the award while attached to the 42nd Division.

“If she were here, she would say, ‘I don’t need a medal. I just did what I had to do’,” said Mary Jane Bolles Reed, Leckrone’s daughter.