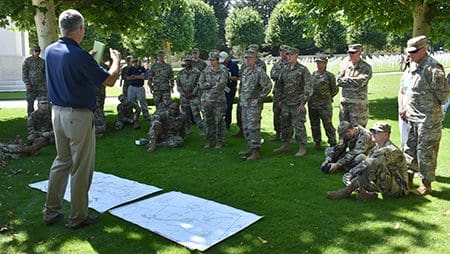 One of the historians guiding them was Maj. Brian Faltinson, a historian and public affairs officer with the Wisconsin National Guard. He was one of three National Guard Soldiers augmenting the U.S. Army Center of Military History’s (CMH) World War I staff ride team.

“The Army National Guard historians from Ohio, Maine and Wisconsin were absolutely instrumental and essential to the success of our World War I Centennial Commemoration activities,” said Dr. Peter Knight, CMH’s staff ride chief. “Having the subject matter experts in the battlefield histories of these National Guard units ensured that the Soldiers now serving in these units left France understanding the lineage, honors, and stories of both unit and individual heroism that their units carry forward from the conflict.” 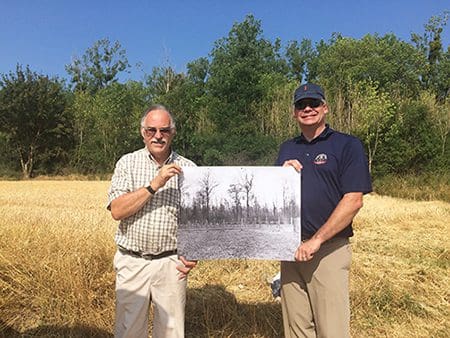 Maj. Brian Faltinson, a historian with the Wisconsin Army National Guard, and the mayor of Sergy, France, stand on Hill 212 at the site of a temporary cemetery for 32nd Division Soldiers who fell in July 1918 during the Second Battle of the Marne. The mayor had pointed out the location of the cemetery shown in the picture. U.S. Army Center of Military History photo by Dr. Brian Neumann

“CMH focused these particular staff rides on campaigns where Guard divisions were heavily involved,” Faltinson said. “Half of the divisions involved in the Second Battle of the Marne were from the Guard, and the entire U.S. Army II Corps assigned to the British sector in Belgium was also from the National Guard.”

CMH selected Faltinson, a professional historian in his civilian career, for its staff ride team because of his work on the Wisconsin National Guard’s “Dawn of the Red Arrow” World War I commemoration project. 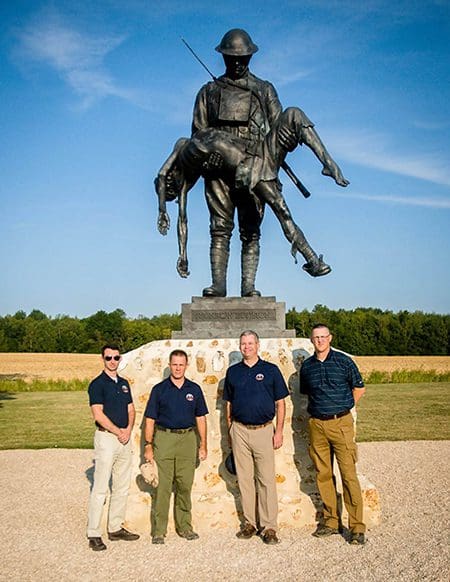 “‘Dawn of the Red Arrow’ tells the story of the beginning of the 32nd ‘Red Arrow’ Division and the origin of the modern National Guard as the primary combat reserve of the Army,” Faltinson explained. “It also honors the service of 15,000 Wisconsin National Guardsmen and 8,000 more from Michigan who volunteered to serve in World War I as founding members of the 32nd Division.”

The staff ride included an overview of entire campaigns, commemorative events at American Battlefield Monument cemeteries, and interactions with French officials, military members and civilians. One such event was a 10-mile historic foot march jointly conducted by the Soldiers and local French residents that followed the attack of three National Guard divisions against a heavily fortified ridgeline about a dozen miles north of Chateau-Thierry.

“We are with our friends here in France to walk in the footsteps of the National Guard divisions that fought here in July and August of 1918,” said Charles Bowery, CMH director, before the march.

“That position [the ridgeline] was attacked and captured at great cost by three National Guard divisions — the 42nd Division from 26 states,” including Wisconsin’s 150th Machine Gun Battalion, “the 28th from Pennsylvania, and the 32nd Division from Wisconsin and Michigan,” Bowery said.

The march began at the 42nd Division Memorial and included interpretive stops that identified specific unit actions or stories of individual Soldiers who fought there 100 years ago. It concluded at the Oise-Aisne American Battlefield Monument Cemetery where more than 6,000 U.S. Soldiers from World War I eternally rest.

“My role in the march was to present the 32nd Division’s baptism of fire at the village of Cierges and Hill 212,” Faltinson said. “This was the 32nd’s first offensive action during the war, and from my location on Hill 212 I could show everyone how the entire battle unfolded for the division.”

While he enjoyed telling the 32nd’s story, the day turned out to be incredibly powerful and rewarding for another reason.

“As I was setting up maps and battle photos on Hill 212, the mayor of a nearby village stopped by and identified the exact location of a temporary cemetery where 32nd Division troops were buried after the battle,” Faltinson said. “I had along a unit crest of the 128th Infantry Regiment — the unit I deployed with to Iraq in 2004 — so I buried it there almost 100 years to the day when those Soldiers fell.”

Such connections are one of the reasons why CMH is conducting its World War I Centennial events in France and Belgium.

“The priceless part of the program is the ability to bring Soldiers who currently serve in those units back to the places where their forefathers and ancestors fought,” Bowery said.

Faltinson’s mission with CMH is not yet complete. This fall he will escort a delegation of Wisconsin and Michigan National Guard Soldiers on a staff ride that will study the role of the 32nd Division in the Meuse-Argonne Campaign.

“Those troops are going to walk the ground where the 32nd Division earned the Red Arrow that they wear on their shoulder 100 years later,” Faltinson said.