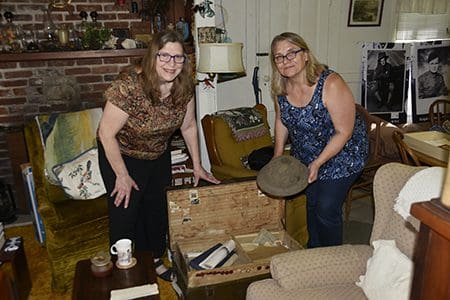 With Company H was Cpl. Ralph Lindsay, a 21-year-old from Monroe who had joined the Wisconsin National Guard in 1913 when he was 16 years old, and whose service to this day has left a lasting impact within his family.

“He was 15 or 16 and lied about his age the first time when he joined,” said Lindsay’s granddaughter Karen Sorenson, who along with her sister Andrea Christofferson have archived Lindsay’s artifacts and stories from his service in the Wisconsin National Guard and World War I.

“My grandfather was a collector,” Sorenson said. “Karen and I have the stories, but other relatives had the uniform and a trunk filled with other items. We now have much of it together to tell his story.” 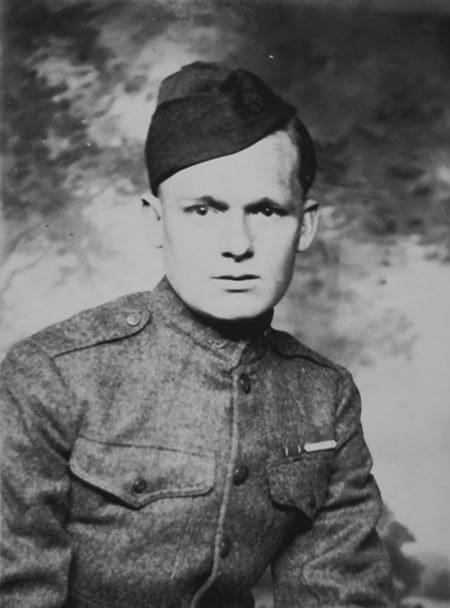 Lindsay signed a three-year enlistment in Monroe’s Company H, 1st Wisconsin Infantry on June 4, 1913 and reenlisted when the federal government called up Company H in 1916 for service near San Antonio, Texas, during the Mexican Border Crisis.

“He had a really strong sense of patriotism and adventure for a boy that age,” Sorenson said. “He was restless and had to do this. Joining the Army was his dream.”

Lindsay, by now a corporal, reenlisted for a third time June 19, 1917 knowing that his unit would mobilize for World War I. By July, he and the rest of Company H would depart home for the Wisconsin Military Reservation near Camp Douglas.

“We know he was there because of all of those pictures of grandma and his sister on the train visiting Camp Douglas,” Christofferson said. 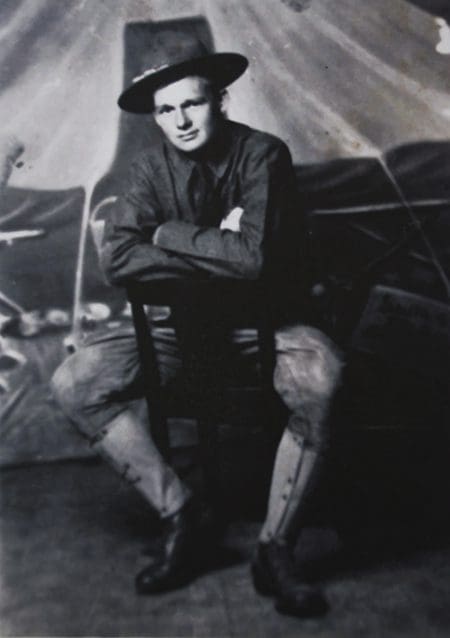 Grandma was Gertrude Wartenweiler who at the time was Lindsay’s friend. They would write each other regularly during Ralph’s time training with the 32nd Division at Camp MacArthur, Texas, and during his service in France.

“We have little stacks of letters from Gertrude to Ralph and Ralph to Gertrude when he was in Texas,” Sorenson added. “Sounds like it was friends when they started writing.”

Unfortunately, the visits at Camp Douglas were the last time Lindsay saw his sister.

“She died of influenza just before he arrived in France,” said Sorenson. “So the letter about her death bounced around and never caught up with him until he was stateside [after the war].”

Christofferson recently retired from the University of Wisconsin Press, and Sorenson is a French professor at Austin Peay University near Ft. Campbell, Kentucky. Sorenson uses Lindsay’s photo collection of planes, horses and other aspects of his service when teaching about 20th-century France. 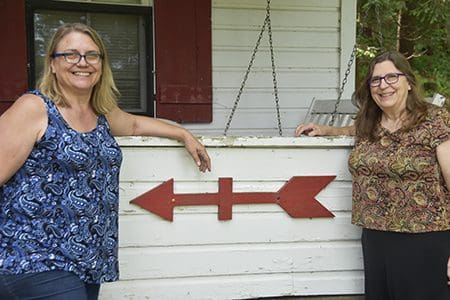 “I regularly use my grandfather’s photos and postcards to talk to my students about the technology of war and World War I,” Sorenson said. “Forty percent of my students are Soldiers from Fort Campbell, veterans, or military spouses.”

She also used the material to create a portion of a larger interactive exhibit of World War I at Austin Peay sponsored by the French consulate. The exhibit included Lindsay’s photographs, letters, helmet and uniform with the 32nd Division’s distinctive Red Arrow insignia.

“I thought, ‘Let’s add a personal side, and let’s show our students the story of one American Soldier in France,’” she explained. 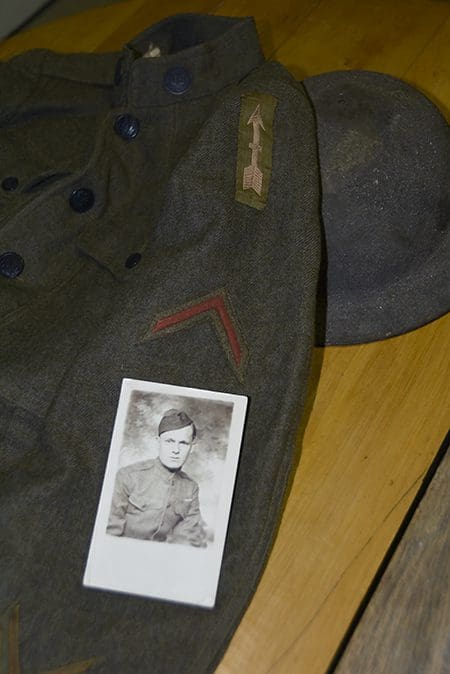 Lindsay departed for France with the 32nd Division in February 1918 and, after a period of training, entered the trenches near Belfort in what was then the Alsace region of Germany.

“He impressed upon us stories of life in the trenches, eating in the trenches,” Sorenson recalled. “Told us over and over again the story of a trench that collapsed on Soldiers.”

Company H moved out for Chateau Thierry in late July 1918 where it would take part in the Second Battle of the Marne — the 32nd Division’s first offensive action of the war.

It was here where Lindsay received the first of his two wounds. It was relatively minor, but he would not return to Company H until mid-September as the 32nd Division prepared for the upcoming Meuse-Argonne Offensive.

On Oct. 4, 1918, the 32nd Division attacked the village of Gesnes. It was Lindsay’s last day with the division. 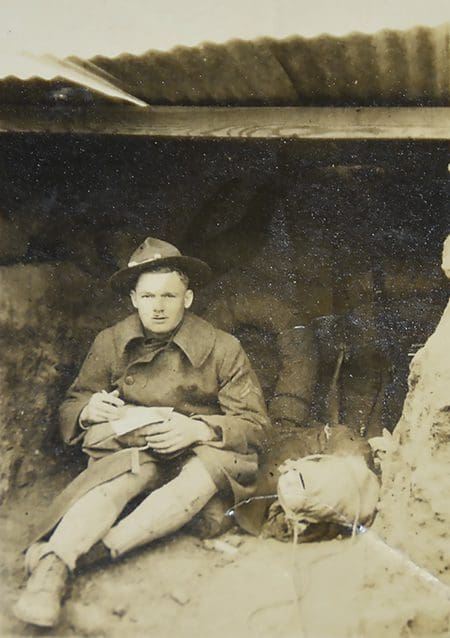 “He was hit with shells twice in the leg — the second time [Oct. 4] was much more serious and he was in the field hospital for a while, then he was sent to a French family,” Sorenson said.

Lindsay convalesced for two months in the village of St. Symphorien with the Jacques Gypteau family. Lindsay remembered the family fondly long after he returned home.

“He loved that family,” Sorenson said. “This woman there was like a mother to him. The family maintained contact with him through letters for a very long time afterwards.”

The problem was that the Lindsay could not read French and had to take his letters to someone for translation.

“Our mom studied French and I think it was because of her dad’s experience,” Christofferson said.

“Grandpa’s letters are one of the reasons I studied French,” Sorenson added.

Lindsay returned home in April 1919 and discharged from the Army; however, his identity as a Red Arrow World War I veteran remained. A few months later, he memorialized a fallen friend when he became a founding member of Monroe’s Glen Zilmer American Legion Post No. 84. Zilmer was a Company H Soldier who had fallen at the Second Battle of the Marne.

He also started a lifelong career with the Monroe office of the Wisconsin Power & Light Company and married Gertrude in 1921. The couple and their three children would vacation at their cabin on Lake Wisconsin, which Lindsay named “Red Arrow Cottage” because he adorned it with the 32nd Division’s insignia.

Red Arrow Cottage was the center of many family gatherings and as a meeting place for Lindsay and his fellow veterans to share war stories and each other’s company.

In 1962, Lindsay returned to Europe to visit his son stationed in Germany with the military.

“They took a car and retraced the entire route where Grandpa had fought with his buddies,” said Sorenson. “He would see a wall and say, ‘This is where Floyd Zilmer fell.’”

Photos from that trip became a slideshow that Lindsay would show to anyone who wanted to see it. It was this show where the two sisters learned of their grandfather’s experiences in the Great War.

“Grandpa Lindsay would get the slideshow out regularly — he would process his war experiences by telling the stories over and over, sharing it, making sure other generations knew,” Sorenson noted. “Andrea and I would try to soak up everything we could.”

With the help of Cpl. Lindsay’s granddaughters, the stories told at Red Arrow Cottage will continue.

Monroe’s Company H, 127th Infantry Regiment reorganized after the war as Company K, 128th Infantry and a Monroe unit remained in 32nd Division until the Army reorganized the Red Arrow into a brigade in 1967.  Today, the Appleton-based 2nd Battalion, 127th Infantry of the 32nd Infantry Brigade Combat Team carries the long and distinguished lineage of the 127th Infantry and serves the Wisconsin Army National Guard as a primary combat reserve to the U.S. Army and first military responder at home in times of state emergency.