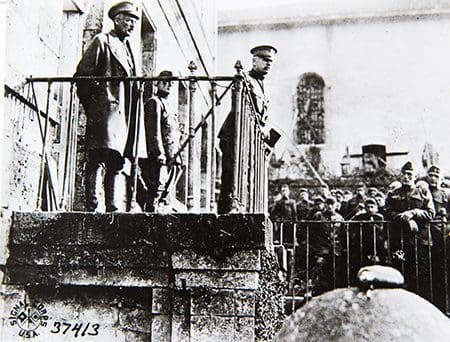 “This is a day of celebration.”

Those were among the first words Maj. Gen. William Haan, commander of the 32nd Division, wrote to his wife Margaret the evening of Nov. 11, 1918, hours after the armistice ending “the war to end all wars” took effect.

Despite rumors of an armistice that had been circulating among American troops for some time, as the sun set on Nov. 10 the 32nd Division was prepared to begin the next day by capturing the line of hills overlooking the Crusnes River in northeastern France. The 64th Brigade — composed of the Wisconsin National Guard’s 127th Infantry and 128th Infantry regiments — was to attack at 7 a.m. to capture the wooded areas at Grand Failly, Rupt, Marville and the wooded heights east of Delut. The battle plan called for a short artillery assault on known enemy positions prior to the attack, with artillery and machine-gun barrages to accompany the troop advance. 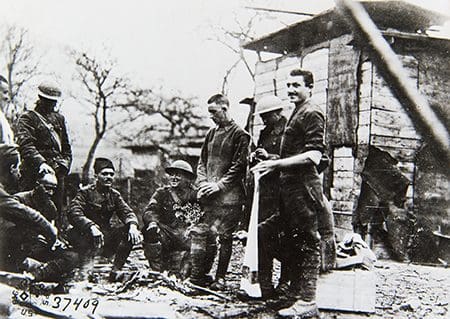 “At 6:30 officers in command of the take-off line were issuing their last instructions,” Haan wrote of the start of the final day of battle. “Fifteen minutes later they were looking at their wrist watches, not with the tense excitement which characterized the approach of zero hour on the Vesle, not with the savage elation with which they waited for their turn in the tremendous smashes at the foe at Juvigny, not with the grim determination with which they entered each succeeding struggle in the Argonne, but with the calm deliberation of veterans who had a day’s work ahead of them, a day’s work the like of which they had done before and which they knew just how to, a disagreeable day’s work; but well — it was all in a day’s work — c’est la Guerre [this is war]!”

Brig. Gen. Edwin Winans, 64th Brigade commander, revealed how combat had hardened the Soldiers of the 32nd Division in a message delivered on the eve of the Oct. 14, 1918 attack on the Hindenburg Line.

“A few hundred yards to the north of you the remnants of the decimated crack divisions of the German army are clinging desperately to the pivotal point of their bruised and broken line on which hangs the fate of their Emperor and the Empire. 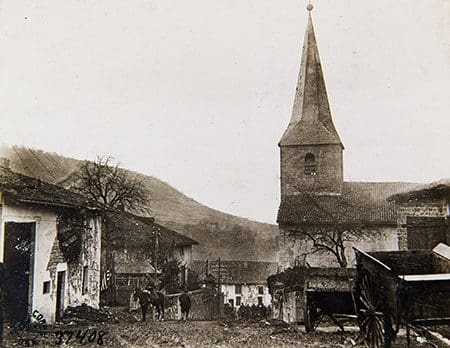 The village of Ecurey in Meuse, France moments after hostilities ceased Nov. 11, 1918. In the final half-hour of the war the village was subjected to heavy bombardment, causing numerous casualties. U.S. Signal Corps photo

“The 32nd Division was sent to this sector to shatter that line,” Winans continued. “You are shock troops. ‘Les Terribles’ the French call you. ‘Fighting sons o’guns’ the Americans call you. You are the very flower of our army. And you who remain up there in front have been tried by fire. The skulkers have skulked, the quitters have quit. Only the man with guts remains.”

It was these battle-hardened men Haan wrote of the morning of Nov. 11.

“Five minutes to seven!” Haan wrote to his wife. “The men started to stir around, getting a toe-hold for the take-off, shaking their equipment into place, gripping their guns. Seven o’clock and some of them were off, over the top. Others had been stopped just in the nick of time, and after the advancing skirmish lines of those who had gotten away went panting runners from headquarters with the magic words: FINIS LA GUERRE! [The war is finished!]” 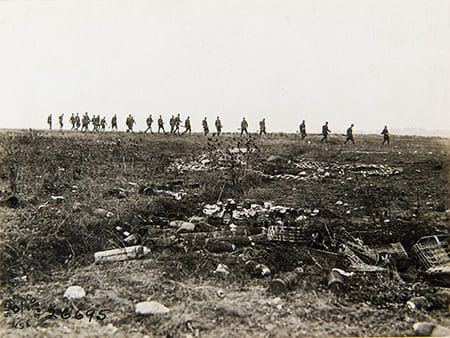 III Corps had informed the 32nd Division shortly before the hour of attack that an armistice was to take effect at 11 a.m. Nov. 11, and to hold troops at their current positions. It appears Haan was mostly successful in this, but now had to reel in those Red Arrows loosed in combat.

Sgt. Maj. John Acker, in his historical narrative of the 107th Ammunition Train Thru the War With Our Outfit, wrote about the end of combat.

“The place and the date mark the birth of a new era, and we were ‘in at the death’ of the old,” he wrote. “It is ‘fini la guerre’ and we were at the front when it ended.”

Since July 1918, Acker continued, his unit had spent just one week where it felt beyond the reach of the German army. Capt. Paul Schmidt, in his own published account, Co. C, 127th Infantry in the World War, detailed the valor, courage and good fortune of his Sheboygan, Wisconsin-based unit. 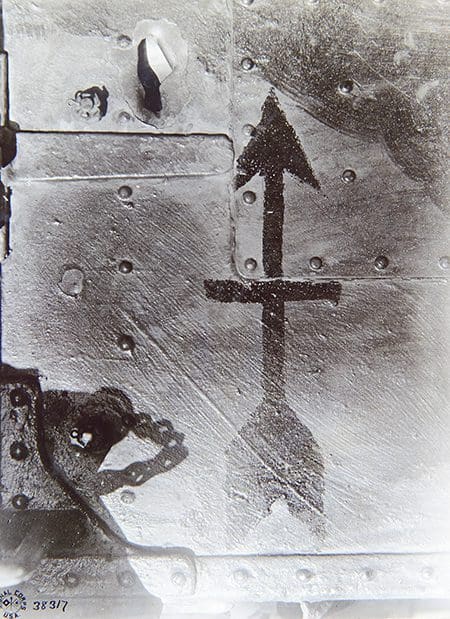 One of the earliest images of the Red Arrow insignia, from Nov. 22, 1918, painted on a 32nd Division artillery caisson damaged by enemy fire in the last few hours of fighting. U.S. Signal Corps photo by Lt. Dowell

“It may be impossible for historians to ably describe the awful confusion of battles under modern means, with engines of death reaching the highest perfection of scientific skill,” Schmidt wrote, “but as for me, I honestly confess that after over 20 years of military experience, I find it impossible to convey even the faintest idea of the terrible destructiveness of modern war weapons.”

Schmidt credited the military experience National Guard Soldiers brought to the battlefield for the 32nd Division’s success in World War I — particularly in the battle that earned the division its nom de guerre, “Les Terribles.”

“Practically every man was from the National Guard, with years of experience and familiar with military tactics,” Schmidt wrote. “And from the time the 32nd Division took a position in the front line at Chateau-Thierry until the enemy was drive across the Vesle River at Fismes, the battles were conducted with the highest possible efficiency, and the successful result of this drive was due to the military knowledge of the troops engaged.”

Perhaps basking in the glow of success — and perhaps overlooking that the American Expeditionary Force had not endured three-plus years of deadly stalemate warfare — Schmidt observed in his book that French troops seemed to stop their advance upon reaching their objective even if it made strategic sense to continue to advance. Similarly, he said the French at times preferred to retreat rather than hold their ground.

“The American troops never stopped until victory crowned their efforts,” Schmidt wrote, “and there is no doubt, but that many battles which otherwise might have been lost were won by the indomitable impulses of our troops.”

The 32nd Division entered combat in late May 1918, having successfully persuaded Gen. John Pershing that the division would better serve the cause fighting as an organic unit than as spare troops for other divisions. The division cut its teeth in the trenches of the Alsace sector — becoming the first American troops to fight on German soil — then forged its reputation in the Second Battle of the Marne. The 32nd further burnished its reputation in the Meuse-Argonne campaign, piercing the previously impenetrable Hindenburg Line — also known as the Kriemhilde Stellung — Oct. 14, 1918. This action was the inspiration for the Red Arrow insignia: a red arrow — which on situation maps indicates troop movement — piercing the Hindenburg Line.

Haan recorded that day’s events in his diary, from a concrete dugout in the Montfaucon woods.

“I consider this the best day’s work that the 32nd Division has yet done, and it has done many good days’ work,” he wrote. “A German officer, who was captured today, stated that the attack of our division was the best planned and best executed of any divisions, British or French, that he had come in contact with except one Scottish Division, who wore kilts and they don’t count.”

One of the most significant changes to accompany the end of hostilities was lights at night, with “every shack, barrack and dugout lit up like an excursion steamer.”

“It is good to be alive tonight,” Acker wrote, “to know that one has been through it and it is all over. My celebration tonight will consist of a sleep like that of the just and the righteously safe. I am going to bed and simply wallow around among the blankets without a fear of whistling shell or of the drone of a Hun motor. It is great to feel perfectly safe.”

News of the armistice spread at different speeds in different locations.

“You received the news undoubtedly long before we did,” Capt. Gustav Stearns, the chaplain for the 127th Infantry now serving as chaplain for a convalescent hospital, wrote to his congregation back in Milwaukee on Nov. 12, 1918. He explained in his letter the distance of the military hospital from the nearest village, and the lack of any railroad lines.

“The armistice was signed early in the morning [although] the news did not reach us until afternoon,” Stearns wrote. “One of the boys said to me, ‘Listen, Chaplain, the village church bells are ringing.’ At once there was great excitement in the camp.”

Making his way to the closest village to confirm the suspicions, Stearns encountered smiling, jubilant peasants who greeted him with the phrase, “Fin la Guerre.” The village postmaster — who also served as telegraph operator and telephone operator — confirmed the news.

With the fighting over — the Treaty of Versailles, officially ending the war, would not be signed until June 28, 1919 — the 32nd Division and other Allied forces prepared for occupation duties. The division began its march into Germany Nov. 17, where it remained until elements began returning to the United States in April 1919.

“That [the 32nd] was an outstanding division was shown by the selection Gen. Pershing made for the Army of Occupation,” Lt. Col. Byron Beveridge wrote in the 1939 Historical Sketch of the Wisconsin National Guard. “The First and Second, both Regular Army divisions with wonderful war records, were assigned with the 32nd to the most important bridgeheads in Germany.

“That alone speaks for the Red Arrow,” Beveridge continued. “No further comment is necessary.”

The Red Arrow lives on today in the form of the Wisconsin Army National Guard’s 32nd Infantry Brigade Combat Team. The Red Arrow, as well as the Soldiers of the Madison-based 64th Troop Command, Milwaukee-based 157th Maneuver Enhancement Brigade and the 426th Regional Training Institute at Fort McCoy join the Airmen of the Wisconsin Air National Guard’s 128th Air Refueling Wing in Milwaukee, the 115th Fighter Wing in Madison, and the Volk Field Combat Regional Training Center as the modern day incarnation of those Soldiers who fought their way into history a century ago. Just as their predecessors did, today’s Wisconsin National Guard continues to answer the call in both its state and federal missions. Hundreds of Soldiers and Airmen are currently deployed worldwide in their roles as the primary combat reserve of the Army and Air Force as the next generation earns the title of “veteran.”

The Wisconsin National Guard simultaneously stands ready to assist civil authorities here at home in times of emergency as it has countless times in the last year during hurricanes and flooding.

Twenty years after the end of World War I, the United States passed a law establishing Armistice Day as a national holiday honoring World War I veterans. In 1954, with the second World War and the Korean War in the past, veterans service organizations persuaded Congress to amend the 1938 act to change Armistice Day to Veterans Day, recognizing American veterans of all wars.