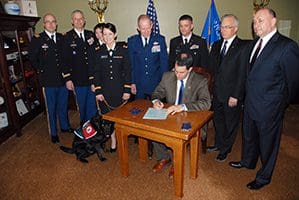 With Sexual Assault Awareness Month drawing to a close, the Wisconsin National Guard unveiled a report on its efforts over the past two years to stamp out sexual assault from its formations.Among the highlights were a series of visits in summer 2013 by the Wisconsin National Guard's senior leaders to every unit in the state to stress the organization's intolerance for sexual assault and to explain how the Guard responds to reported cases of assault.In late 2013, Wisconsin became the first state to create a team of legal advisors, known as special victims counsel, who represent victims of sexual assault through the investigation and prosecution phases of the cases. The Guard also worked with the Wisconsin State Legislature and Gov. Scott Walker signed into law an update to the Wisconsin Code of Military Justice's definition of sexual assault. Wisconsin became the first state to amend its state code specifically to provide an enhanced Sexual Assault Punitive Article, Article 120.
read more