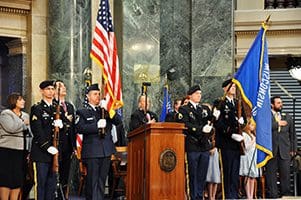 MADISON, Wis. — The Wisconsin National Guard continued a tradition dating back to the 19th century by supporting the governor's Jan. 5 inauguration ceremony.In the closing days of 1881, Edwin Bryant, Wisconsin's adjutant general, ordered four companies — the Oshkosh Rifles, Fond du Lac Guard, South Side Turner Rifles, and the Burchard Guard — to rendezvous at Madison on Jan. 2, 1882 "for the purpose of being present at the inauguration of the governor and state officers elect."
read more 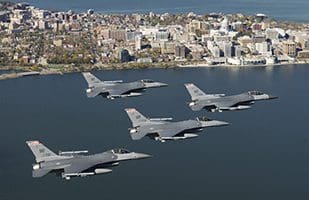 MADISON, Wis. — Airmen from the 115th Fighter Wing in Madison, Wisconsin, are scheduled to deploy this month in support of the Pacific Command (PACOM) Theater Security Package (TSP).Approximately 250 personnel and 12 F-16 Fighting Falcons will fall under the 18th Wing at Kadena Air Base in Okinawa, Japan. The TSP deployment is designed to provide the PACOM region with forces capable of a variety of operations, including disaster relief, global situational awareness, combating piracy, active defense and power projection.
read more 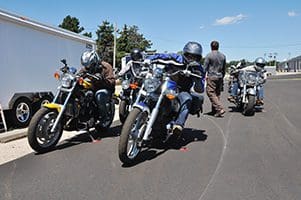 MADISON, Wis. — As the motorcyclists mounted their bikes and rode in a slow circle around a parking lot, Jason Herheim barked out commands, instructions and encouragements like a drill sergeant.“This is what you got a motorcycle for, right? To drive around parking lots?” he joked over the sound of multiple engines.The riders, all members of the military, were not beginners — this was an advanced riders course, sponsored by the Wisconsin Air National Guard’s 115th Fighter Wing and facilitated by Madison Area Technical College.
read more 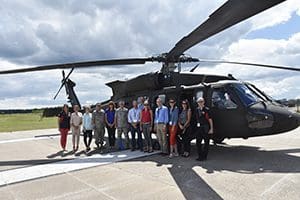 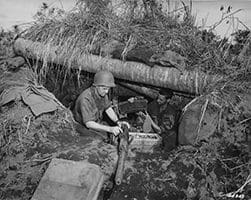 Editor’s Note: “The Cruelest Climb,” an article published in the current issue of GX Magazine, an Army National Guard official publication, chronicles one of the most grueling marches in modern military history. During World War II, National Guard Soldiers from Wisconsin and Michigan serving in the famed Red Arrow Division, endured a 130-mile trek through a steaming jungle and over the 10,000-foot-high Owen Stanley Mountains in New Guinea en route to intense combat with the Japanese. Col. Mike Rand, the commander of today’s Red Arrow Soldiers in the 32nd Infantry Brigade Combat Team, offers his thoughts on the meaning of the Red Arrow.The Red Arrow to me is a reminder. A symbol that focuses on remembering the Soldiers who gave everything for their fellow Soldiers, their communities, their state and nation. The 32nd Infantry Division was created during World War I, formed out of the tough and hardy men of the states of Wisconsin and Michigan who went overseas to the battlefields of Europe and fought as tenaciously and as fiercely as their state’s symbols, the badger and the wolverine.
read more 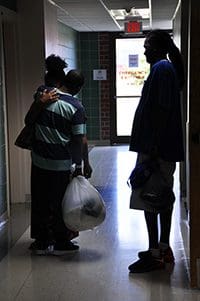 FORT MCCOY, Wis. — Back-to-school activities came early — July 23 — for more than 150 high-school-aged teens from communities across the state.Seeking to make significant and positive changes in their lives, these teens traded in the last few weeks of summer vacation, free time and privacy for a shot at redeeming wasted opportunities — a seat in the 22-week Wisconsin National Guard Challenge Academy.
read more 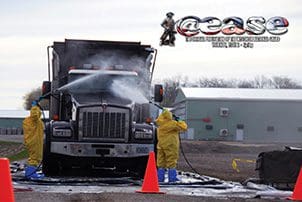 See what’s new in the Wisconsin National Guard. Click on the image to the right to check out the latest edition of @ease, our on-line, interactive magazine.
read more 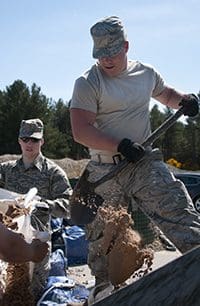 KINLOSS BARRACKS, Scotland — The smell of pine needles and the North Sea was heavy in the air. Sea birds swooped in circles above while the sun shined down on the grassy field. Metal shovels crunching through wet dirt and the hum of idled machinery echoed throughout the opening. Wiping sweaty brows and sighing with exhaustion, Wisconsin Air National Guard Airmen with the 128th Air Refueling Wing’s Civil Engineering Squadron carried on with their work — part of Exercise Flying Rose June 2015 at Kinloss Barracks in Morayshire, Scotland, United Kingdom.Exercise Flying Rose is an exchange exercise between the U.S. Air National Guard and British Army, said Lt. Col. Heath Duncan, 128th Air Refueling Wing Civil Engineering Squadron commander for the exercise. During Exercise Flying Rose, forces deploy to one another's countries and work to complete construction-related jobs.
read more 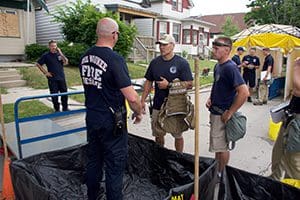 When the Soldiers and Airmen of the Wisconsin National Guard’s 54th Civil Support Team arrived in Milwaukee last week, they faced an unknown hazardous materials threat in a vacant school building on the city’s northwest side.Representatives from the FBI, the Milwaukee Police Department’s Hazardous Device Unit, or “bomb squad,” and the Milwaukee Fire Department’s Hazardous Materials Team were already on-hand, as were representatives of the Environmental Protection Agency and local public health officials. The bomb squad and the hazmat team had already entered the building with robots and quickly determined that a potential weapons of mass destruction threat existed inside the building, and the CST was called in to assist.
read more 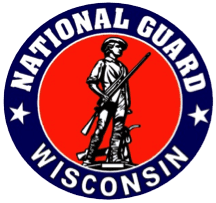 In response to last Thursday’s armed assault on military personnel at two facilities in Chattanooga, Tennessee that killed four Marines — including one from northwestern Wisconsin — and a Sailor, Gov. Scott Walker has directed Maj. Gen. Don Dunbar, Wisconsin adjutant general, to arm certain members of the Wisconsin National Guard while on duty.“Safety must be our top priority, especially in light of the horrific attack in Chattanooga,” Walker said. “Allowing our National Guard troops to carry weapons while on duty gives them the tools they need to serve and protect our citizens, as well as themselves.”
read more